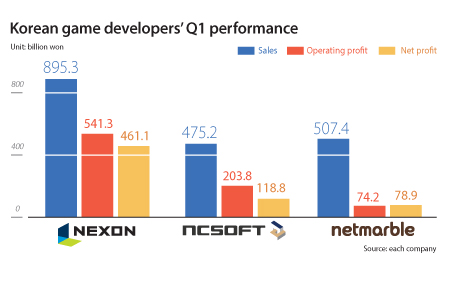 The three Ns have a new king.

Nexon, a Korean game developer headquartered in Japan, announced record-breaking first quarter figures on Thursday while its local rivals struggled to produce hit games they could cash in on.

Its operating profit from the period was 541.3 billion won, up 38 percent from the same time last year. Its net profit 46.1 billion won, which grew by 134 percent compared to a year earlier.

A spokesperson from Nexon could not provide a precise figure due to its contractual obligations with Tencent, its partner in China, but he said Dungeon & Fighter, a beat ’em up action game, recorded sales in China that far exceeded initial forecasts.

With its strong first-quarter performance, Nexon took over as the top Korean game developer from Netmarble, outrunning its competitors by as much as 400 billion won.

While Lineage M continues to rake in cash for the company, market watchers were disappointed that NCsoft decided to delay the release of new titles that were expected to propel the company forward.

During a conference call on Thursday, Yoon Jae-soo, the chief financial officer of NCsoft, said the release of the Mmorpg Blade & Soul 2 will be postponed to 2019 for the sake of “more in-depth” development.

Before Thursday, it was expected that the game would hit the market sometime in the second half of this year.

“Lineage 2M will hit the market early in the first half of next year before Blade & Soul 2,” explained Yoon. Lineage 2M is the mobile version of Lineage 2, which was already released on PC.

“[With the delayed release of Blade & Soul 2], the new game lineup for NCsoft in 2018 will be limited, which is alarming [for market watchers],” said Ahn Jae-min, an analyst from NH Investment & Securities. “Due to the delay, we decided to lower the target performance of the company.”

Netmarble, which was riding high on the success of Lineage 2: Revolution last year, took a step back this time around.

While the company came in second among the three Ns in terms of sales ? 507.4 billion won, a 26.2 percent decline from the first quarter of last year - it dropped to last place when it came to operating profit, at 74.2 billion won, and net profit with 78.9 billion won.

“Its intellectual-property based mobile Mmorpgs are declining,” said Sung Jong-hwa, an analyst from eBest Investment & Securities. “The company will continue to take a breather until the third quarter, when it will gain momentum with the release of new games such as Blade & Soul: Revolution.”