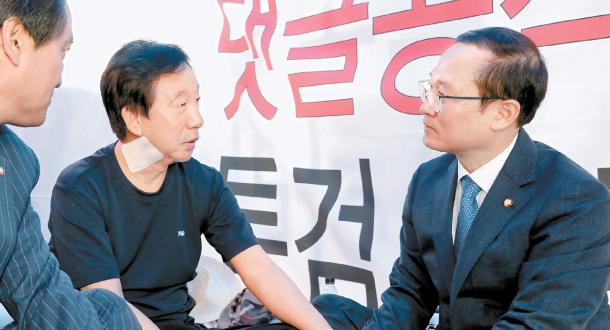 The ruling party elected a veteran lawmaker to be its floor leader on Friday, giving President Moon Jae-in a strong ally in the legislature as his party rides on high approval ratings from its rapprochement with North Korea.

Hong Young-pyo, a three-term lawmaker who has served in the National Assembly since 2008, has close ties with Moon and will likely steer the Democratic Party’s 121 representatives in favor of his agenda.

“Our party should work as the vehicle carrying momentum to put the government’s agenda into action,” Hong told party lawmakers before the vote at the National Assembly. “If the force for reform appears waning, it is our party that should reignite that force.”

Hong, formerly a labor activist, handily defeated Noh Woong-rae 78 to 38. Five lawmakers did not participate in the vote.

The new floor leader stressed the importance of bipartisan cooperation in improving relations with North Korea and said politicians should demonstrate unity in working toward a peace treaty on the peninsula. Fighting in the 1950-53 Korean War ended with an armistice, not a peace treaty, so the two Koreas technically remain at war. At their summit last month, Moon and North Korean leader Kim Jong-un agreed to work on a peace treaty.

Hong said a show of bipartisanship will be necessary to draw support from the United States Congress. Transitioning from an armistice to a peace treaty will require Washington’s consent. “To that end, I will launch a special parliamentary committee on inter-Korean relations,” he said.

The Democratic Party is riding on a wave of strong public support. In the latest Gallup Korea poll on Friday, the party’s approval rating stood at 53 percent, far ahead of the conservative Liberty Korea Party’s 11 percent, the centrist Bareunmirae Party’s 8 percent and the left-leaning Justice Party’s 5 percent.

The new floor leader’s first test will be whether he can persuade the Liberty Korea Party to stop boycotting legislative activities. Its floor leader, Kim Sung-tae, went on a nine-day hunger strike to demand the legislature approve an independent counsel investigation into Democratic Party supporters who allegedly abused the comments sections on news stories and manipulated public opinion during last year’s election.

As a gesture of bipartisanship, Hong’s first act as floor leader was to visit Kim at his tent in front of the National Assembly. Later that day, he officially ended his hunger strike. The Liberty Korea Party cited a warning from doctors who said Kim’s life could be at risk if he continued his strike.

Before they were lawmakers, Hong and Kim were both labor activists. Never before have the floor leaders of the legislature’s two largest parties shared such a background. The similarities between the two men’s careers have raised expectations of a solution to the political impasse.

Kim expressed hope that the parties might break through their gridlock. “As a fellow activist who championed labor rights in the past, we have nothing that we can’t compromise with a sense of sincerity,” Kim told Hong during his visit.

After their meeting, Kim was taken to the hospital for treatment. His condition had deteriorated after nine days of fasting.

One central point of contention is whether to mandate an independent counsel on a case involving the Democratic Party.

In March, police arrested a former party supporter for allegedly using software to fiddle with comments on Naver, the country’s most popular portal site, and increase “likes” on comments favorable toward President Moon when he was a candidate. The Liberty Korea Party suspects the operative carried out the campaign on behalf of Rep. Kim Kyoung-soo, a close confidant of Moon currently running for South Gyeongsang governor.

Both the lawmaker and Democratic Party have vehemently denied the allegations and contend that there is no need for an independent counsel since prosecutors are already investigating the case.

The prolonged standoff has prevented the National Assembly from convening and leaves the resignations of four lawmakers in limbo.

The four lawmakers - three from the Democratic Party and one from the Liberty Korea Party - are running for other positions this year, and the Assembly has to formally process their resignations, but if the legislature doesn’t do it by next week, their districts’ seats will be vacant until next April.