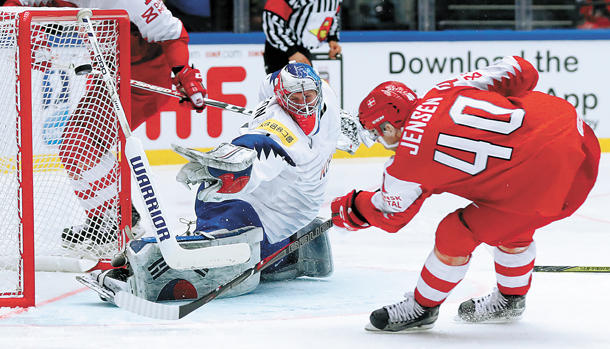 Korea has suffered its sixth consecutive defeat at the men’s hockey world championship.

The 18th-ranked Korea lost to the 14th-ranked Denmark 3-1 in Group B action at the International Ice Hockey Federation (IIHF) World Championship in Herning, Denmark, on Saturday (local time).

Forward Jesper Jensen broke the 1-1 tie midway through the second period, and Nichlas Hardt scored an insurance goal on a third-period power play before a partisan crowd at Jyske Bank Boxen arena.

This is the highest level of the IIHF’s world championships, and Korea is playing there for the first time after earning a promotion with a runner-up finish at last year’s Division I Group A tournament.

There are two groups of eight, and the last-place teams from each group will be sent down to Division I Group A in 2019. Since the IIHF adopted the current promotion-relegation system for its world championships in 2012, no team has survived the top competition a year after getting promoted from Division I Group A.

And Korea must defeat world No. 9 Norway in regulation in the teams’ final group game on Monday just for a shot at survival. Coached by former National Hockey League (NHL) defenseman Jim Paek, Korea has been overwhelmed for much of the tournament and remains the only one among eight nations in Group B without a point.

Norway sits in seventh place, right above Korea, with three points from one shoot-out win, one overtime loss and three regulation losses. Norway’s penultimate Group B game is against the United States on Sunday, a match that the Europeans are expected to lose.

Korea and Denmark were scoreless in the opening 20 minutes - the first time Korea didn’t concede a goal in a period - and traded few dangerous scoring chances.

Then Denmark finally got on the board 2:55 into the second period. Just seconds after Denmark’s first power play ended, Detroit Red Wings forward Frans Nielsen snapped one home from just inside the left circle, beating goalie Matt Dalton high on the glove side.

Denmark nearly doubled its lead about a minute later on a 2-on-1 breakaway, but Dalton robbed Jesper Jensen of a sure goal by sliding across the crease to keep the puck out at the last possible second.

On the ensuing play at the other end, Korea made the spectacular save count by tying the score at 4:18.

It was the Kim brothers on the top forward line connecting. Kim Sang-wook, the younger one, stole the puck from Frederik Storm along the end boards and found his older brother Kim Ki-sung wide open for a shot that beat Frederik Andersen.

Buoyed by the equalizer, Korea continued to apply pressure on Denmark. But the host country stood its ground and reclaimed its lead at 12:14.

Jesper Jensen wasn’t denied the second time by Dalton. Oliver Bjorkstrand secured the puck along the side boards after a failed Korean clearing attempt and then zipped a sweet feed to Jensen for a one-timer past Dalton on the blocker side.

With fans who’d anticipated a blowout win for Denmark on the edge of their seats, Korea hung tough and refused to go away. And with about five minutes left in the third period, Kim Ki-sung nearly got his second goal on a wraparound.

Korea entered this contest as the most penalized team in the tournament, having been short-handed 35 times, and a late penalty proved costly in this game.

With 4:10 to go, Brock Radunske was called for an interference just in front of the benches. And 45 seconds into the power play, Hardt made Korea pay, as he tipped in a low centering pass by Frans Nielsen.

Dalton was pulled for an extra attacker with just under two minutes remaining, but Denmark hung on for its third consecutive victory.