Moon’s first year was a great success. Unless you’re unemployed.

Moon’s first year was a great success. Unless you’re unemployed. 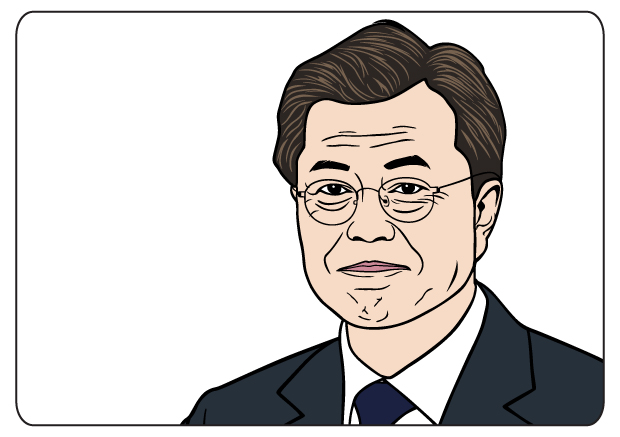 With growth of 3.1 percent in 2017, the first time it topped 3 percent since 2014, income per capita likely to reach $30,000 for the first time ever by the end of this year and steady export growth, President Moon Jae-in’s economic scorecard after one year in office isn’t looking too bad.

Since taking office in May last year, Moon has succeeded in keeping some of the economic promises he made on the campaign trail, starting with a record hike of the minimum wage. When it comes to jobs, the government has also kept its promise to reduce working hours, creating 53,000 new public servant positions and converting 107,000 government employees that were previously contract workers to regular employees; creating roughly 20 percent of the public sector 810,000 jobs he had promised.

The central theme of Moon’s policy is changing the country’s economy to be more centered on workers rather than big corporations and major exporters.

In fact, his economic chiefs have been leveling the playing field for smaller businesses by regulating conglomerates to put an end to the manipulative business practices that saw chaebol hiring their own affiliates while easing the financial burden on middle and lower income families by lowering the maximum annual loan interest while cutting down commission charges by credit card issuers against small self-employed shops like restaurants and barbershops.

More recently there has been growing optimism fueled by a recent historic meeting between the South Korean president and his North Korean counterpart Kim Jong-un.

The historic April 27 summit has raised hopes that economic cooperation between the Koreas may soon resume. Inter-Korean economic cooperation, including North Korean tourism and the joint Kaesong Industrial Complex, was stopped during the last two conservative governments.

Related stocks have been on a bullish rally and optimism is growing over Moon’s New Economic Map, which envisions an energy resource belt, industry-logistics belt and distribution-transportation belt that connect the two Koreas along the east and west coast of the peninsula and the border, all of which could contribute to South Korea’s economic growth.

With such positive results and growing hype, Moon has become the first president to have an approval rating of 83 percent in his first year.

Still, Moon told his cabinet members on Tuesday to stay guarded and not to lose sight of the goals they established when they took office a year ago.

“Everyone has done a great job so far,” Moon told his cabinet. “But we could unconsciously loosen up and become overconfident.”

On the surface, the economic indicators seem to be positive -the economy has grown 2.8 percent in the first three months of this year. But numbers can be deceptive, and the public certainly seem to think so. While a Gallop poll conducted between May 2 and May 3 on 1,002 adults showed the approval rating for Moon’s handling of North Korea at 83 percent and diplomacy at 74 percent, when it came to the economy, he only scored 47 percent.

The low approval rating is likely linked to Moon’s income-led growth policy, the government’s plan to change Korea’s economic structure and reduce the power and control of conglomerates and major exporters.

The concept is simple. The goal is to create quality jobs that will increase disposable income, encouraging spending that will lead to larger profits for businesses and, in return, companies raising investment. The idea is that the system comes full circle as companies can then hire more people and offer higher wages, contributing to economic growth.

In fact, one of the first things that Moon did after taking office was to rush to Incheon International Airport to meet employees working under contracts or hired through contractors. Moon effectively declared the start of an era where there are no contract workers in the public sector, laying out one of the cornerstones of the administration’s job plan.

But statistics suggest that income-led growth is already falling at the first hurdle - job creation.

As of the first quarter of this year, 26.3 million have a job, a slight increase from 26.1 million a year earlier.

The record-breaking hike in the minimum wage is considered one of the key factors behind the disappointing job figures.

Finance Minister Kim Dong-yeon on May 2 cautioned against blaming the increase in the minimum wage for the struggling job market, arguing that at least six months need to pass before the impact can be measured.

“It’s too early to draw conclusions after only two or three months,” Kim said.

However, the job market does already seem to be reacting.

In March, 1.26 million were unemployed, a 10 percent increase from a year ago. As a result, the unemployment rate has risen to 4.5 percent, up from 4.1 percent a year ago.

The service industry in March alone saw 116,000 jobs loss compared to the same month a year ago.

The increase in the number of unemployed people mostly comes from the shrinking job market in the service sector, particularly in the wholesale, lodging and restaurant industries that are more sensitive to changes in the minimum wage.

Small businesses struggling with the higher minimum wage have been reducing the number of employees they hire, and most of the people working in these areas are part-time employees.

Additionally, according to the Korea Employment Information Service, the number of people receiving money from unemployment insurance reached a record level in the first quarter this year.

If somebody loses their job, they get an allowance for between 90 and 240 days at the pay rate that they received in their previous job. In the first quarter, the number of people that received such an allowance amounted to 628,433 people, which is a 6.9 percent, or 40,557 more than a year ago.

Market experts have noted that the Moon government has been too focused on creating jobs, particularly in the public sector, and has not done enough to secure a growth engine to solve the unemployment problem in the long run.

“The government has allocated its budget on [jobs] in the public sector, which has the lowest productivity, and ignored any attempt to reignite the [nation’s] growth potential or revitalize investment,” said Pyo Hak-gil, Seoul National University honorary professor on economics.

Pyo has been critical of the Moon government’s income-led growth policies, emphasizing that growth with job creation as the unilateral target is fundamentally limited.

He said research and development and innovation in production processes strengthen corporate competitiveness, which can then boost the economy.

Some experts have even argued the 3 percent growth achieved last year was not the result of the Moon administration’s policies, but a reflection of the global economy.

“Korea’s economy is largely affected by the global economy, and it’s hard to say last year’s 3.1 percent growth was thanks to the current government,” said Song Eui-young, an economics professor at Sogang University. Song especially noted that, while the government has promised to push innovative growth alongside income-led growth, there is still no concrete plan explaining how the administration plans to encourage innovation.

Experts say that Korea has actually been losing momentum.

Industrial production fell 1.2 percent in February and 1 percent in March.

The growing dependency on the semiconductor industry, which seems to be the only industry that has been thriving recently, also has experts concerned.

The production of automobiles and ships, which have traditionally been key pillars of Korea’s economy, have been retreating. Production of cars fell 12.5 percent in March compared to a year ago, while other transportation manufacturing, including ships, dropped 20 percent.

The KDI director said the government needs to provide a clear direction on innovative growth while creating a swift and consistent policy execution system.

A recent survey by the Association of High Potential Enterprise of Korea found that 29.2 percent of 377 member companies thought that the biggest disappointment of the first year of Moon’s government was the lack of innovative economic policy.

While 35 percent of the poll said Moon’s greatest achievement was leveling the playing field for small and medium-sized businesses, they said the government should focus more on policies that secure future growth engines and innovative industries.

This year will likely be an important year for the Moon government. The second year of an administration is typically when policy, especially economic policy, starts to have a noticeable effect.

“Considering that Korea’s administrations last for five years, the first year is when an administration comes up with an outline on policies and direction,” said Ha In-hwan, an SK Securities analyst. “In the second year, the policies start to be fully implemented, and the third year is when the government starts enhancing the policies that have gone into full effect, or adding new policies.”