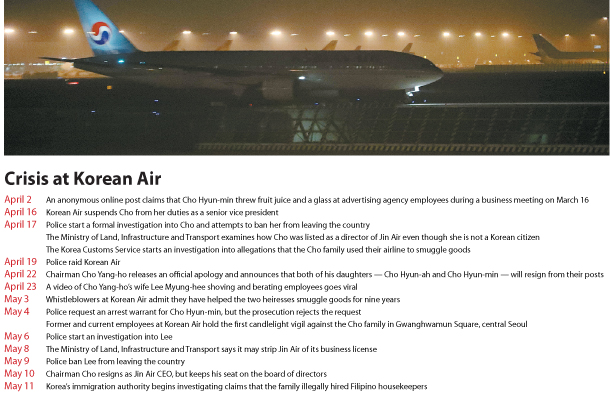 The family that owns Korea’s largest airline is being investigated by numerous government agencies after the youngest daughter Cho Hyun-min came under fire for allegedly throwing a drink at employees during a business meeting. As well as the legal investigations, Korean Air and Hanjin Group employees and the general public have taken to the street in protest of the Cho family’s behavior. Here are the basics as to what the Cho family is accused of and why it has struck a chord with the Korean population.

Q. Who are the Cho family?

Chairman Cho Yang-ho inherited the company from his father Cho Choong-hoon, the founder of the group. He married Lee Myung-hee, chairwoman of Hanjin’s nonprofit Ilwoo Foundation and daughter of a former vice minister of transport. The couple have two daughters - Cho Hyun-ah and Cho Hyun-min - and one son, Cho Won-tae.

Cho Won-tae, the president of Korean Air, is the only member of the siblings that still has a job at the Hanjin Group - both his sisters have lost their titles in the last month.

Q. What are the ongoing investigations into the family?

The current string of scandals began when younger daughter Cho Hyun-min allegedly threw fruit juice and a glass at advertising agency employees during a meeting in March. She claims she just knocked the cup off the table and threw the glass against a wall, but the police are still investigating her on obstruction of business. An earlier assault accusation has been dropped on the request of the victims.

Lee is also under investigation on suspicion of assault and obstruction of business. She came under scrutiny after a video leaked that showed her shoving and berating employees. The alleged victims in this case want Lee punished, so the assault charge stands.

On top of the individual charges, the entire family is being investigated by the Korea Customs Service for using airline employees and resources to smuggle their personal shopping into Korea.

The Ministry of Land, Infrastructure and Transport also has a case open on Hanjin. The ministry is considering canceling Jin Air’s business license after discovering that Cho Hyun-min, who served on the low-cost carrier’s board of directors for six years, is not a Korean citizen. Under Korean aviation law, non-Koreans cannot serve on the board of an airline.

The Fair Trade Commission is looking into whether Hanjin Group affiliates took unfair levels of profit from sales of tax-free goods on Korean Air planes. The immigration office is also probing claims that the family illegally hired Filipino housekeepers.

Q. Have there been past incidents involving the Chos?

The Cho family has been the face of chaebol power abuse for some years now. In 2014 elder daughter Cho Hyun-ah made headlines around the world when she ordered a taxiing plane back to its gate because she was not happy with the way her macadamia nuts were served.

Cho Hyun-ah was sentenced to one year in jail in 2015, but didn’t serve the whole term after a top court cleared her of violating the aviation security law.

She made a brief return to Korean Air at the end of March as president of KAL Hotel Networks, but she barely had time to find her desk before she was shown the door due to the recent smuggling scandal.

Yes, power abuse has become so prevalent in Korean society that it has its very own term - gapjil, a word used to describe the myriad ways that a higher-ranked person abuses people who are of lower standing.

One notable case in 2013 saw a Posco Energy executive hit a Korean Air flight attendant in the face with a magazine because his noodles were too salty. The executive briefly became the embodiment of gapjil in Korean society before Cho Hyun-ah stole away the title the following year.

Jung Woo-hyun, former chairman of the MP Group and founder of Mr. Pizza, assaulted a janitor for locking up a building while he was still inside. It wasn’t Jung’s building. He was fined 2 million won ($1,874) in 2016.

But none of those cases resulted in a massive movement against the abuser like in the Korean Air case. Some experts suspect that the success of the candlelight movement that led to the impeachment of former President Park Geun-hye helped galvanize employees to take action.

Q. What are the possible legal ramifications?

There hasn’t been any legal punishment yet. For Cho Hyun-min, the punishment is likely to be minimal. The assault charge has already disappeared after victims decided not to proceed with the case, leaving Cho facing a charge of obstruction of business. It’s unlikely she’ll face many, if any, legal ramifications for ending a two-hour meeting when it was only 15 minutes in.

The assault case on Lee could go much further, depending on how many victims the police manage to talk to. She’s currently banned from traveling out of the country.

The smuggling case has the potential to blow up into something much bigger. Two whistleblowers from Korean Air that claim to have been directly involved in the smuggling process have come forward, and the Korea Customs Service has found a mysterious hidden room in Cho Yang-ho’s house in Pyeongchang-dong, central Seoul.

The Cho sisters, at the center of the smuggling case, could face up to five years in jail or a penalty worth up to 10 times the value of the import tax they allegedly never paid.

When it comes to Jin Air’s business license, industry insiders think the low-cost carrier will probably be okay. The ministry is still considering legal options.

Q. Have the ongoing scandals affected the Hanjin Group?

Chairman Cho released a public apology on April 22, about 10 days after the drink-throwing scandal first broke. He promised to fire his two daughters, but the attempt at appeasement didn’t do much to calm the public or the authorities.

Employees decided to take matters into their own hands, establishing a secret KakaoTalk chat room that thousands of Hanjin Group employees use to discuss the family’s power abuse and report evidence to the authorities, including the evidence against Lee. The group also organized a series of public protests.

The market has so far been surprisingly forgiving of the ongoing scandals, with the price of Korean Air shares fluctuating slightly but not falling.

Q. How has the public reacted?

Public support for Korean Air employees has been overwhelming, with hundreds of thousands of people petitioning the government to ban Korean Air from using “Korean” in its name. The gapjil element to the ongoing scandal struck a chord with the public, and hundreds of people joined employees at the candlelight protest in Gwanghwamun Square, central Seoul on May 4.

While there are moves to boycott Korean Air, there are limited options for people looking to fly out of Korea, with 26 routes exclusively operated by the embattled airline. It is the only airline offering direct flights to major cities such as Washington, Las Vegas, Milan and Madrid from Incheon.

Q. Can the government strip Korean Air of the “Korean” badge?

There are no legal grounds to take the “Korean” tag away from a private corporation run by shareholders, unless the shareholders choose to do so. However, as 133,892 Koreans have signed the petition as of Friday, and the Blue House has promised to discuss any issue that garners more than 200,000 supporters, there is a chance the government will have to properly consider the proposal.

Q. Has there ever been an owner family that has lost control of its company?

No, not among the major family-run conglomerates we know. A number of owners have been sent to jail for fraud or bribery, but it’s never very long before they’re back to work after an upper court suspends their term or a president doles out a pardon. The case against the Chos is already making history in terms of scale and public outcry, but employees still face a long uphill battle if they intend to try and completely remove the family from management.