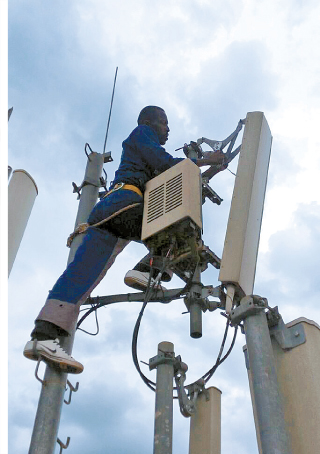 An employee of KT Rwanda Networks works on the first nationwide LTE network in Rwanda. [KT]

The new network will provide LTE coverage to 95 percent of Rwanda’s population.

In 2013, KT established KT Rwanda Networks (KTRN) as a joint venture with the Rwandan government.

The establishment of the nationwide LTE network comes three and a half years after the joint venture first offered LTE service in Kigali, Rwanda’s capital. KT added that the project is receiving attention across Africa as a successful collaboration between the government and a foreign company.

Information development has been one of the core industrial initiatives for Rwanda, a country with few resources and limited land area. The country has a population of approximately 12 million, of which 8.6 million own mobile communication devices and 1.15 million use smartphones.

The completion of Rwanda’s LTE network was celebrated at the Transform Africa Summit 2018 held in Kigali last week. The ICT conference was attended by key government figures from 54 African countries.

“The nationwide LTE network is a result of a close partnership between the Rwandan government and KT,” said Jean de Dieu Rurangirwa, Rwanda’s minister of information technology and communications. “The government will offer strong support to expand the usage of the network to elevate our people’s quality of life.”

KT said it plans to expand its partnerships with governments in African countries such as Nigeria, South Africa, Malawi, Benin and Senegal.