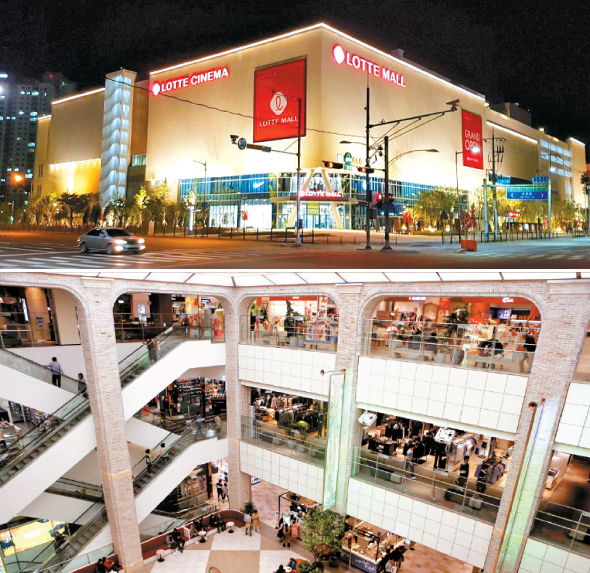 The new Lotte mall in Gunsan that opened at the end of last month. [Lotte Shopping]


GUNSAN, North Jeolla — It was lunchtime in early May at a small restaurant in this industrial city on the western coast of Korea, but there were barely any customers.

“Ever since Lotte Mall opened on April 27, the number of people visiting Susong-dong has dropped, and the number of customers has gone down by half,” an employee at the restaurant said. “The commercial district in Gunsan has been developing with Yeong-dong and Susong-dong in the center, but it is worrisome that it might be moving toward Jochon-dong” where the new mall opened.

Despite the negative impact that Lotte Mall was having on their business, six of the restaurant’s employees admitted they would go to the mall if they had free time. They were happy that a shopping complex had finally arrived in Gunsan, which is located about 180 kilometers (110 miles) from the bustling capital of Seoul.

But the arrival of Lotte Mall has split this small city of 270,000. While consumers are excited to have a commercial and cultural space, small businesses are concerned about the impact it could have on them. Its arrival is especially worrisome because the city’s GM Korea plant was recently closed, and the local economy is still reeling from the shutdown.

One night before the mall’s grand opening, the Ministry of SMEs and Startups warned Lotte that it would force the mall’s closure if it failed to reach an agreement with Gunsan’s small businesses on how to accommodate them.

“We only got the notice from the government 12 hours before the mall’s opening,” said Lee Kun-woo, head of the Lotte Mall in Gunsan. “The damages will be immense if we shut down.”

The local merchants’ associations want Lotte to foot half of a fund to support small businesses in Yeong-dong, Naun-dong and Susong-dong — all districts that fall outside the mall. Two years ago, the Gunsan city government determined that 45 billion won ($42 million) would be enough to help businesses in these three neighborhoods. The merchants are demanding Lotte pay 26 billion won.

“We are willing to reach an agreement on co-existing with Lotte if it plans to pay the proposed amount,” said Lee In-gyu, head of the Gunsan apparel merchants’ cooperative.

But among the merchants, there has been some divisiveness. Initially, they protested the mall being built at all when they first formed an emergency committee in 2015.

The following year, the city government mediated and brought the emergency committee and retail giant together to discuss ways of coexisting. Some of the ideas included banning brands sold by local businesses from setting up shop in the mall and providing opportunities for merchants to open inside the mall.

Since then, some merchants have left the committee to form their own groups, including the apparel collective. Some have betrayed the initial cause and set up shop in the mall.

“Those who once strongly opposed by carrying a mock coffin on the street at one point just vanished,” one cab driver commented. “It looks like those with the loudest voices got a deal by getting a store in the mall.”

Kim Hak-sin, who represents another merchants’ association in Gunsan, claimed that the local government provided benefits to Lotte in hopes of attracting the retail conglomerate to the city. “But when problems arose, they asked the concerned parties to solve them on their own,” Kim said. “The Gunsan city government said they plan on coming up with a long-term plan to revitalize the old commercial district, but judging from their past actions, it’s hard to believe.”

Yoo Dae-keun, a marketing professor at Woosuk University, said the city government only made things worse by trying to mediate and making its position ambiguous.

“With the merchants split into three groups, they have lost the ability to properly represent themselves,” he said. “It would be best if the merchants regroup as one.”