Recognizing the beauty of traditional tables : Exhibit gives visitors the opportunity to learn how soban are carefully crafted

Recognizing the beauty of traditional tables : Exhibit gives visitors the opportunity to learn how soban are carefully crafted 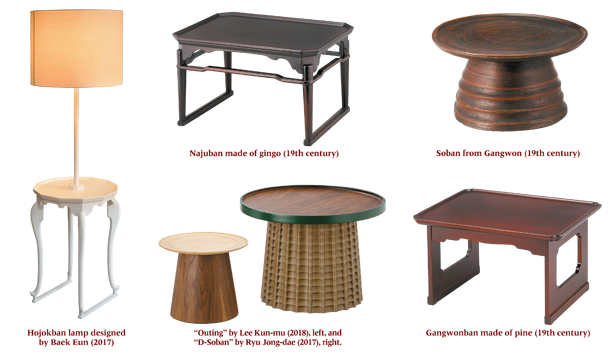 Back in the Joseon Dynasty (1392-1910), a must-have piece of furniture at home was a soban, or a small portable dining table. Due to the way traditional Korean homes, or hanok, are structured (with the kitchen located in the lower level, far away from the bedroom), as well as the Korean custom of eating on the floor, soban was important for every home.

As women were required to carry soban sets with many bowls and plates of food for the family in and out of the kitchen and dining room, soban had to be carefully designed so as not to be too heavy or cumbersome.

Because of the Confucian tradition of not sharing the same table with people of different genders, classes and age groups, it was common for a household to have at least two to three different soban. To attract female customers, different designs of soban were created using different wood, which ultimately produced great artisans and making soban one of the most treasured traditional woodcrafts.

The Korea Cultural Heritage Foundation is holding an exhibition dedicated to this traditional portable table at its center in Gangnam District, southern Seoul. The exhibition is first of the foundation’s exhibition series, which will “search for the beauty of traditional Korean crafts.”

“We’ve selected soban as the first item of this exhibition project as it was one of the most frequently-used items by our ancestors,” said Jin Ok-sub, chief of the foundation. “Especially in the Joseon Dynasty, it was customary to have one soban per person, but after modernization, we began to see a great decline in demand and lost our great soban-making artisans, known as sobanjang, who are now national intangible cultural heritage [holders].”

Some 70 soban are on display and the exhibit is divided into three sections. Visitors will first encounter soban from the Joseon Dynasty. There are different types of soban exhibited here, such as hojokban, with legs shaped like a tiger’s, and gujokban, with legs that resemble a dog.

In the second section, visitors can enjoy the works of artisans who work as sobanjang today. The artisans, according to the foundation, are so-called holders of intangible cultural heritages such as soban making and lacquer varnishing. Visitors here can enjoy looking at how soban from different regions have their own distinctive characteristics. In the final section, visitors can witness how younger designers have reinterpreted soban and modernized it in their own style. The modern soban are more colorful and not restricted to the traditional form.

The exhibition runs until May 20.