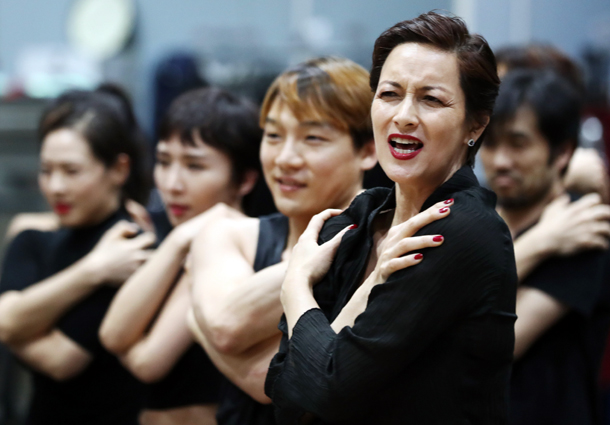 Park Kolleen performs at a practice session for the musical “Chicago” in Seoul on May 11. Park will come back as Velma Kelly, the first time globally that a director has joined the cast of the musical. [YONHAP]

Since its launch in 1975, the Broadway musical “Chicago” has set a string of boundary-pushing records: The show was revived on Broadway in 1996 and the ongoing revival became the longest-running American musical in Broadway history.

In Korea, the show was first staged in 2000 with local casting. Since then, the Korean production has set its own share of unprecedented records in the Korean musical market and the history of “Chicago.”

For one thing, Park Kolleen, after directing the local edition for the past 13 seasons, will join the upcoming 14th season with a role change that is unprecedented in the history of “Chicago.”

Newly trained in dancing and acting, Park will come back in the role of Velma Kelly, one of “Chicago’s” main characters, not as the music director, the first case of a director joining as a main cast member for the American original or its international productions.

Set to kick off its 14th season on May 22, the Korean production is also on course to celebrate its 1,000th performance next month, a rare feat in the local musical market.

As the musical continued for 18 years here, it also saw a young actor move from the role of the young main character Roxie Hart to the older one, Velma Kelly. Choi Jung-won, jokingly dubbed “the foremother” of the Korean musical industry, was double cast as Velma for the 14th season after joining in the inaugural season as Roxie.

The Korean production will also bring back together other well-rounded musical big names, such as Nam Kyung-joo and Ivy, who have each acted for three seasons in the past as Billy Flynn, the main male character, and Roxie.

For TV star and singer Ahn Jae-wook and TV actress Kim Ji-woo, the upcoming season is their first “Chicago” stage. They were each double cast as Flynn and Roxie.

“When I was first asked to audition, I was mistaken and I said ‘Yes, I will direct the music,’” Park said, touching on her dramatic role change.

Park said she didn’t know she was being asked to take up a main role for the musical. “I am a person who has not danced for my entire life and I knew [‘Chicago’] requires dancing,” she said, citing dancing as the biggest challenge to her transition.

Based on an actual story-based play and mastered by musical theater legend Robert Fosse, “Chicago” depicts the actual trial cases of two women accused of murder in 1923 in the city of Chicago, satirizing the corrupt criminal justice system and crimes by celebrities in the American Jazz age.

“This year we have very interesting casting…These very talented actors and very important people for the Korean musical theater, they are so open and willing to change and enjoy the challenge of the same roles in different ways,” Tania Nardini, “Chicago” associate director, said.

Gary Chryst, the associate choreography director, who is also jointly in charge of casting, pointed to the significant progress made over the course of the Korean edition’s many seasons.

“This is the best ensemble we’ve had since 2007. The first time I was here in 2007 to do the audition, the level and the standard of the talent, it was a challenge for us…and when last year we had auditions, we had an abundance of talent because the talent in Korea has risen so much,” he said.

“So we had to fight between three of us who we are going to have. So you will be very excited to see what they will present to you and we still have a couple of weeks left to polish to make it even better.”

Choi likened the Korean “Chicago” to kimchi, in that it gets tastier as it matures over time. “The addition of the new cast this year is an upgrade to the previous seasons.”

Compared to its previous acts, the upcoming version is 20 percent less in splendor and grandeur, said Park. But the script was rewritten to give a better understanding of the original with more detailed wording, she said, recalling her previous experiences.