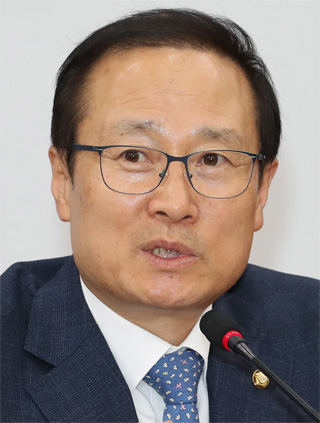 The new floor leader of the ruling Democratic Party said Sunday he expects a plenary session of the long-stalled National Assembly will be held today to accept the resignations of lawmakers running in the upcoming local elections.

Rep. Hong Young-pyo made the remark in the first news conference since his election Friday, saying it is the National Assembly speaker’s obligation to hold a plenary session if lawmakers submit resignations.

“We will make preparations on the assumption that there will be a plenary session tomorrow,” he said.

Speaker Chung Sye-kyun has repeatedly suggested he would invoke his right to convene a plenary meeting to handle the resignations without the consent of opposition parties.

The move would be a boon to the ruling Democratic Party, because the parliament’s approval of the resignations of the four lawmakers would enable by-elections to be held at the same time as June’s local elections, at a time when the popularity of the ruling party is running high.

Three out of the four lawmakers who are resigning - Reps. Park Nam-chun, Yang Seung-jo and Kim Kyoung-soo - are with the ruling party, and the other, Rep. Lee Cheol-woo, is with the main opposition Liberty Korea Party (LKP).

The ruling party believes that if by-elections were held in June, it could sweep all four seats. The party’s approval rating reached an all-time high of 56.9 percent last week against the main opposition party’s 17.4 percent.

Unless the resignations are endorsed at a plenary session by Monday, however, the by-elections to fill the vacant seats will be put off until after April next year.

The National Assembly has been idling as the LKP has been boycotting all parliamentary proceedings while demanding that the ruling party agree to a special investigation into an opinion-rigging scandal involving a blogger with alleged ties to a ruling party lawmaker. The LKP has strongly protested Chung’s suggestion of invoking his right to hold a plenary meeting. Should a plenary meeting be convened and the resignations accepted, tensions between the two rival parties are expected to deepen further.

On Sunday, the opposition party warned of a breakdown of the National Assembly if a plenary session is convened without its consent, saying the lawmakers’ resignations should be dealt with in a package with other issues, including the demand for an independent counsel probe.

“What speaker Chung should do now is not pressure the opposition party, which is struggling to uncover the truth, but pressure the Blue House and the ruling party for trying to cover up the truth,” Rep. Chang Je-won, a party spokesman, said.