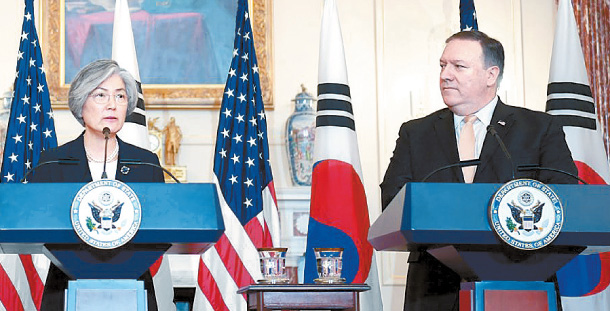 U.S. Secretary of State Mike Pompeo said that the United States is ready to help North Korea achieve economic prosperity if it takes “bold action to quickly denuclearize” after a meeting with his South Korean counterpart in Washington on Friday.

“If North Korea takes bold action to quickly denuclearize, the United States is prepared to work with North Korea to achieve prosperity on par with our South Korean friends,” Pompeo said in a joint press conference following his meeting with the South’s Foreign Minister Kang Kyung-wha. “Today, Foreign Minister Kang and I discussed the summit, my trip to North Korea, and the bold step President Trump is about to take when he meets with Chairman Kim [Jong-un].”

Kang and Pompeo’s first meeting in Washington came as part of preparation for the summit between South Korean President Moon Jae-in and U.S. President Donald Trump, set to take place in Washington on May 22. Trump is set to meet with Kim on June 12 in Singapore.

“The United States and the Republic of Korea remain committed to achieving the permanent, verifiable, and irreversible denuclearization of the Korean Peninsula,” he said. “If Chairman Kim chooses the right path, there is a future brimming with peace and prosperity for the North Korean people. America’s track record of support for the Korean people is second to none.”

When asked by a reporter for a clearer definition of what the U.S. government means by PVID of the North’s nuclear weapons, Pompeo said, “It would be an activity that undertook to ensure that we didn’t end up in the same place that we’d ended up before, or multiple passes at trying to solve this conundrum for the world, how to ensure that North Korea doesn’t possess the capacity to threaten not only the United States but the world with nuclear weapons.”

Pompeo added that denuclearization will “require a robust verification program” which will “achieve that outcome in a way that frankly no agreement before it has ever set forth.” He emphasized that on his recent trip to Pyongyang he and Kim reached “a pretty good understanding between our two countries about what the shared objectives are.”

Kang echoed Pompeo’s remarks regarding the denuclearization of the North, though she continued to call for CVID.

“Secretary Pompeo and I discussed preparations for the summit meeting between President Trump and Chairman Kim in Singapore on June 12,” she said in the press conference. “We agreed that the summit would be a historic opportunity to resolve the North Korean nuclear issue and secure enduring peace on the Korean Peninsula. We reaffirmed that our goal is achieving complete, verifiable, and irreversible denuclearization of the Korean Peninsula.”

“So there was no talk about reducing the USFK at all,” she said. “If there was any talk about the USFK, it was only about how solid our alliance is, and any issue, any discussion about the USFK or alliance should be discussed as such, between our two nations, which are in alliance, and not in North Korea and U.S. talks, which was confirmed by Secretary Pompeo.”