A folding screen containing the “36 Immortals of Poetry” by an anonymous artist in the late 17th century is a rare painting on display for the first time at the Horim Museum in southern Seoul. [HORIM MUSEUM]

A large collection of old Japanese paintings that have never been shown before are being exhibited for the first time at the Horim Museum’s branch in Sinsa-dong, southern Seoul, and is sure to astonish both Korean and Japanese art experts.

The collection covers a period of 700 years, from the 14th-century Muromachi Period, through the Edo Period of the 17th to 19th centuries to the 20th-century Meiji Era. The 90 or so paintings were collected by the museum’s late founder Horim Yun Jang-seob, a businessman who was an avid collector of Korean objects of cultural heritage. Before the museum organized the exhibition, it was unknown that Yun had such a large collection of Japanese paintings.

This special exhibition titled “The Masters of Japanese Painting” has been organized to commemorate Yun, who passed away in May 2016.

Many would think of colorful woodblock prints and paintings known as Ukiyo-e artwork when thinking about Japanese art, but like other East Asian countries, Japanese ink painting, which is called sumie, also began to develop in the 14th century. This is when Chinese ink paintings flowed into Japan through trade with the Ming Dynasty of China. In the 15th century, ink painting became mainstream and a new group of painters called the Kano School emerged.

Nanga-style ink paintings, a type of Japanese literati painting that developed by adopting Chinese style into Japanese tradition, are also on display at the exhibit. 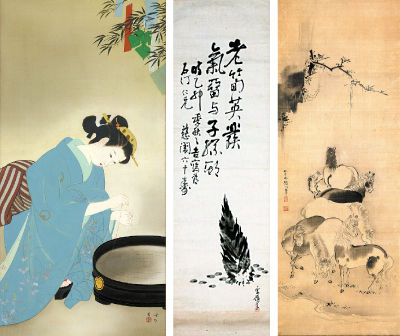 With its exhibition titled “The Masters of Japanese Painting,” the Horim Museum is displaying some 90 Japanese ink and color paintings covering 700 years, including, from left, “Galaxy Festival” (1946) by Ito Shinsui; “Bamboo Shoot” (1915) by Imamura Unrei; and “Horses” (19th century) by Ishida Yutei. [HORIM MUSEUM]

“In the early years of the Middle Ages, the brush strokes tend to be thinner but over the course of 100 years, it became thicker,” said Lee Jang-hun, the museum’s curator.

Meanwhile, according to Lee, it is the color paintings that make Japanese painting distinctive.

“Just at a glance, people can see that a painting is Japanese by looking at the peculiar sense of color used by the Japanese painters,” he said.

The tradition of Japanese color paintings traces back to the 12th century, during the late Heian Period. In the 7th to 9th centuries, most Japanese paintings were influenced by Chinese paintings imported to diplomatic missions, but in 894, the Japanese government abolished the mission and since then, a distinct Japanese style of paintings began to develop, known as “Yamato-e.” Visitors can also see rare artworks at the exhibit, including two folding screens of the “36 Immortals of Poetry” as well as an album containing the “36 Immortals of Poetry.”

According to the museum, there are many paintings depicting only half of the “36 Immortals of Poetry,” and paintings that have all 36 of them are considered very rare, even in Japan. Horim managed to collect three of the rare artworks, two in the form of a folding screen and one album.

“I think Japanese art experts will pay the most attention to this collection,” said Prof. Kang Min-gi of the department of art studies at Hongik University, who advised the museum while it curated the exhibition.

The final section of “The Blooming of Paintings ? the Artistic Exchanges in East Asia” on the second floor is where paintings created after artistic exchanges between countries in East Asia are displayed. Edo Period paintings are displayed here, which illustrate Japan’s relations with China and the Joseon dynasty of Korea.


“The Masters of Japanese Painting” will be exhibited at the Horim Museum in Sinsa-dong, southern Seoul until July 3. It will open again on July 6 and run until Sept. 29. For more information, visit www.horimmuseum.org.