Apartment is a distant dream as prices rise, pay doesn’t

Apartment is a distant dream as prices rise, pay doesn’t 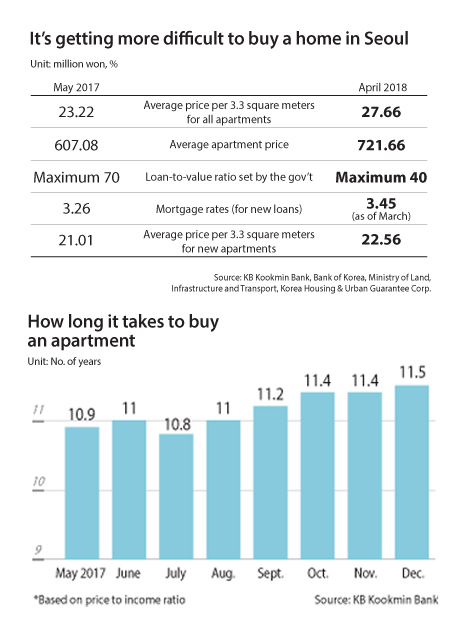 Park Sung-il, a 37-year-old office worker in Seoul, moved into a 59-square-meter (635.07-square-foot) apartment in Mapo District, western Seoul, last July, putting up 400 million won ($374,590) as a deposit for his two-year jeonse (long-term rental) contract. He thought about buying the apartment but decided to count on the Moon Jae-in administration’s promise to bring down housing prices and delayed his plan to buy his own home.

To his disappointment, the asking price of his Mapo apartment rose by 130 million won in just 10 months, around 20 percent.

And it has gotten both more difficult and more expensive for average Koreans like himself to borrow money to buy real estate.

“The dream of buying my own home really became just a dream,” Park said. “We simply gave up on buying a house for now.”

Park is one of many Koreans for whom the chance of buying a home anytime soon got slimmer in the past year.

Apartment prices have soared in the past year - despite the Moon’s administration efforts to cool off the market - while average incomes have barely risen.

On the other hand, average income for three-member households went from 4.93 million won in 2016 to 5.00 million won in 2017, a 1.5 percent increase. Based on those figures, the price-to-income ratio in Seoul, which determines the affordability of housing overall in an area, rose from 10.9 to 11.5 as of the end of last year, the highest level in the past eight years.

This means an average household must save for more than 11 years, without spending a penny out of their paycheck, in order to buy an apartment in Seoul.

But borrowing money from banks also got more difficult and expensive in the past year, with lending regulations getting stricter and interest rates rising.

“Conditions got especially difficult for people in their 30s to 40s that have fewer savings than older people,” said Ham Young-jin, director of the big data lab at Zigbang, a mobile real-estate service provider.

Last June and August, the Moon administration lowered the loan-to-value (LTV) requirement - the percentage of a sales price that can be borrowed - from a maximum of 70 percent to 60 percent and then to 40 percent. This means that a buyer who borrowed up to 350 million won to buy a 500 million won apartment a year before can now only borrow up to 200 million won.

“As mortgage loan requirements got tougher,” said Kim Gyu-jeong, a real estate researcher at NH Investment and Securities, “it only became harder to purchase a home.”

It also got more expensive maintaining a mortgage.

But no matter how difficult it gets, Koreans cling to the hope of owning their own house one day, an indication that demand for apartments will not die.

In a survey done by the Ministry of Land, Infrastructure and Transport, 82.8 percent of respondents said they must own their own homes, up 0.8 percentage points from a year ago.

“As housing prices rose dramatically higher than income, we need measures that expand the number of low-priced homes available in Seoul,” said Kwon Dae-joong, a professor of real estate at Myongji University.

“The government must expand measures to supply mortgages to those yet to own a home and adjust the LTV requirement based on the needs of individual buyers,” added Lee Tae-ri, an associate research fellow at the Korea Research Institute for Human Settlements.