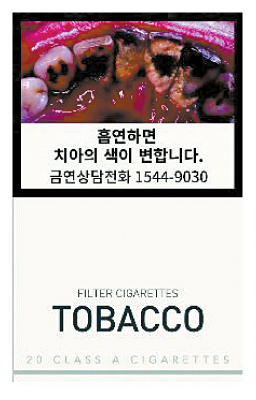 A photo provided by the Ministry of Health and Welfare shows a new pictorial warning on cigarettes packs for tooth discoloration, one of the side effects of smoking. [YONHAP]

South Korea will change the graphic warnings on cigarette packs in December, the Health Ministry said Monday, in the latest move to curb smoking.

The government changes the graphic warnings every 24 months as part of its efforts to maintain awareness of the side effects of smoking, according to the Ministry of Health and Welfare.

On Monday, the ministry announced 12 new pictorial warnings that will be placed on cigarette packs, including the electronic tobacco heating device called iQOS, starting on Dec. 23.

The graphic images show smokers suffering from fatal ailments, such as lung cancer, oral cancer, laryngeal cancer, heart attack and stroke, while also carrying warnings about serious side effects, such as the dangers of secondhand smoke, sexual dysfunction and premature death, according to the ministry.

The new graphic images include tooth discoloration, the ministry said.