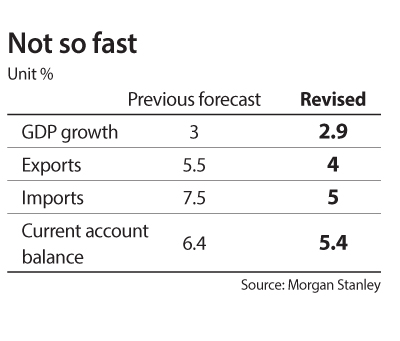 The New York-based investment bank released a report Monday that lowered its estimate for Korea’s economic growth to 2.9 percent from a previous projection of 3 percent. The Korean government is projecting 3 percent growth.

The report noted that despite optimism over improved relations between the two Koreas, there’s no sign that warmer ties will boost growth in Asia’s fourth-largest economy.

“A decentralized North Korea that then goes on to liberalize would alleviate geopolitical risks and possibly spell capital expenditures and consumption opportunities for South Korea and other stakeholders,” the report said. “We have been watching recent developments, which appear to be pointing to a rising possibility that things could move towards a new equilibrium of sustained deceleration.”

It said it does not expect policy measures or reforms to provide significant support for economic growth.

The Moon Jae-in government, which celebrated its first anniversary last week, has an unprecedented public approval rating of 83 percent. But when it came to economic issues, its rating was below 50 percent, especially on the subject of jobs, which the administration has made one of its top priorities. Job opportunities are the key goal of the Moon government’s so-called income-led economic growth agenda.

“It is not obvious to us how wage growth can be sustained at the recent momentum if employment growth does not pick up further,” Morgan Stanley’s report said. “So far, with the export recovery driven to a large extent by semiconductors, a broad-based spillover to the labor market has been absent.”

Unemployment has gone up to 11 percent among people between the ages of 15 and 29 despite government spending of 25 trillion won ($23.3 billion), including an 11 trillion won supplementary budget to create jobs last year.

The Moon government is now seeking the approval of the National Assembly for a 3 trillion won supplementary budget that would focus on creating jobs at small companies.

The report also raised concerns about Korea’s exports, which for the first time in 18 consecutive months saw negative growth in April compared to the previous year.

While saying that global growth will remain strong, supporting Korea’s exports for this year and the following year, it projected that China, Korea’s key trading partner, will see a moderate slowdown.

“Trade friction will be a wild card to watch - every 1 percentage point slowdown in Korea’s export growth would reduce its GDP growth by 0.3 percentage points,” the report said.

Morgan Stanley projected that a continuing deceleration in the construction market will offset capital expenditure momentum, which contributes 16.6 percent of the nation’s growth.

The report said that while it believes some measures taken by the Moon government are in the right direction, a bigger issue is decreasing productivity, which is crucial for long-term, sustainable growth.