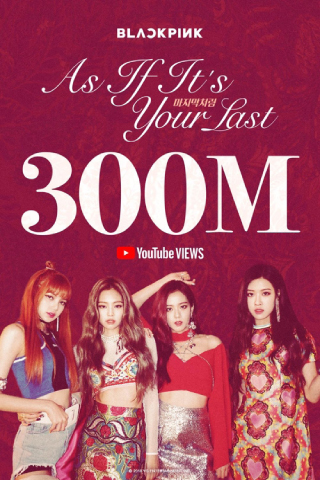 The music video for the popular girl group Blackpink’s most recent single, “As If It’s Your Last,” has garnered more than 300 million views on YouTube.

The video surpassed the threshold at around 3:00 a.m. on Monday, about one year after it was released, according to YG Entertainment.

It recorded the biggest number of clicks among all videos for Korean pop songs uploaded on the video-sharing service last year. It was the only K-pop video on Billboard’s list of “25 most popular songs for this summer on YouTube” in 2017.

“As If It’s Your Last” is the girl group’s second song that has surpassed 300 million YouTube views after “Boombayah,” released in 2016.