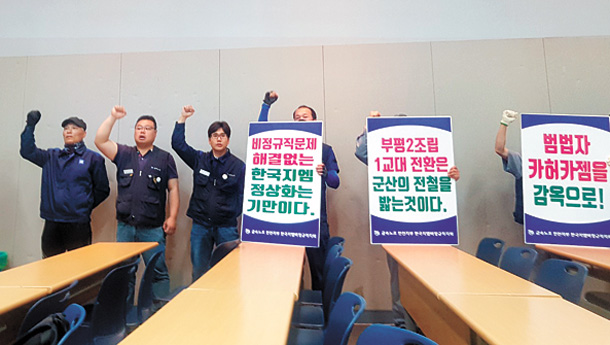 GM Korea called off a press conference on Monday at its Bupyeong plant in Incheon after contract workers stormed the venue and refused to leave.

Around a dozen members of the union of GM Korea contract workers barged into the press conference hall Monday morning through the back door just 10 minutes before the event was scheduled to begin.

GM Korea management negotiated with the union for 20 minutes and asked them to leave the venue, but the members refused.

The union insisted that they had come to watch the press conference, but GM Korea management didn’t buy it. Last month, regular employees of the carmaker trashed GM Korea CEO Kaher Kazem’s office.

“Due to the unexpected rally by the union, we came to the conclusion that it would be impossible to hold the press conference as scheduled,” said GM Korea spokesman Park Hae-ho. “There is a safety issue.”

Five executives, including Barry Engle, GM’s international president, and Kazem, were scheduled to oversee the press event and announce the Korean operation’s long-term goals and plans to turn a profit by next year. It was the first media event the company organized after GM Korea’s crisis began in February.

“They treat us as if we are terrorists,” said Hwang Ho-in, the head of contract workers at GM Korea’s Bupyeong plant. “There is no reason the press conference should be canceled just because we are here. It means that GM isn’t determined to genuinely normalize GM Korea.”

According to Hwang, GM Korea recently laid off 300 contract workers, leaving 2,000 left. If the company’s restructuring plan goes through as planned, about 1,000 more contract workers will be on the verge of losing their jobs.

“The union of the regular workers yielded a lot toward the end of negotiations, which is why our demands were mostly not included in their requirements,” Hwang said.

A GM Korea official said that negotiations with the union apply only to regular workers and that contract workers are not included.

The carmaker said it currently doesn’t have a plan to hold another press conference.