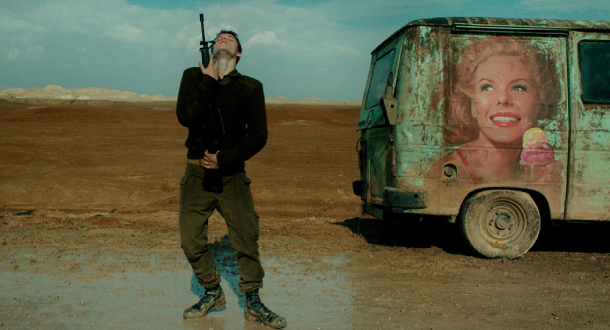 In Israeli director-writer Samuel Maoz’s wrenching anti-war movie, “Foxtrot,” the filmmaker doesn’t simply talk about loss, but highlights the futility of war through the depiction of unnecessary death.

The director, who was also behind 2009’s “Lebanon,” which won Golden Lion at the 66th Venice Film Festival, took home the Grand Jury Prize at the same event last year for “Foxtrot.”

The title of the Israeli drama is the name of a completely desolate checkpoint on a supply road trafficked by Palestinian cars and wandering camels. But it’s also the name of a style of dance, in which the dancer “always winds up at the same starting point,” according to the character Michael (Lior Ashkenazi).

A former army commander with a wife named Daphna (Sarah Adler), Michael is a seemingly strong husband and father, who, in fact, suffers from trauma after his experience in the army. Trying to repress the memory renders him emotionally numb, making it impossible to express his feelings. His mentally unstable mother, a Holocaust survivor, suggests that no lesson has been learned from the past through the repeated damage that seems to continue to this day. 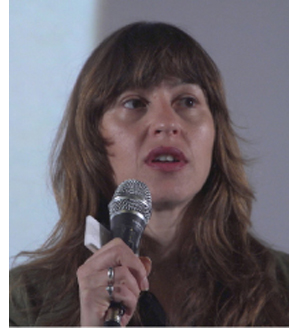 Actor Sarah Adler talks about “Foxtrot,” in which she plays the mother of a soldier, following the film’s screening at Jeonju International Film Festival. [JEONJU INTERNATIONAL FILM FESTIVAL]

The film opens with soldiers knocking at the couple’s upscale apartment to bring them the news of the death of their son Jonathan (Yonatan Shiray). After Daphna faints and is immediately sedated, Michael, in the next room, absently listens to the soldiers’ condolences in wide-eyed pain. Soldiers tell Michael to remain calm and hydrated. The authorities even program his phone to chime every hour to remind him to drink a glass of water, a scene that captures the film’s absurdity.

“Above all, [the director] cared about the absurdity,” Adler told audiences after the film’s screening at the 19th Jeonju International Film Festival (Jeonju IFF) on Wednesday. “The jokes are almost beyond reality,” the actor added, to explain the director’s intention of highlighting the absurdity of war portrayed in the movie.

Even when Michael himself hasn’t managed to calm down, his emotionally drenched relatives visit and throw themselves into Michael’s arms, thinking their presence and condolences can comfort Michael. Unable to handle any of what’s going on or share his emotions, the man scalds his hand in a bathroom until the physical pain matches the emotional pain he feels. He finally bursts out in a fury when soldiers return to inform him that there had been a mistake and that his son is still alive. Due to his actions, he is treated as if he is in a psychotic state.

The film shifts to Foxtrot, where Jonathan serves along with three fellow soldiers. Having barely reached adulthood, they giggle over women and their sexuality. Jonathan, also a talented illustrator, draws sensual cartoons, which later come alive to represent how he sees his father. His smooth and rhythmic foxtrot dance moves represent the soldiers’ youth, filled with hopes and dreams.

But while they occasionally lift a barricade to Palestinians and camels, the soldiers often humiliate the Palestinians by stealing their goods and creating embarrassing situations. In one scene, a man and a woman are forced to stand in place with a bright spotlight shining on their faces while standing in the rain. Not being able to resist, the man, who looks to be the woman’s boyfriend, avoids her dread-filled eyes. The young soldiers’ gradual loss of moral equilibrium is represented by the slowly-tilting shipping container they reside in.

“The war in Israel, as well as in many countries, is very present. Young men and women have to serve in the army, and some of them go through very traumatizing experiences that not only affect them but also their families,” Adler said. “Those young soldiers are [barely] grown-up kids, who are trained to do things they don’t have the capacity and maturity to handle. They’re not bad people but are functioning as soldiers. [The film] shows the absurdity of the situations soldiers can be put in and the cruelness of the war.”

The actor further explained that despite the traumatizing experiences faced by individuals, many people become immune to the state of war, choosing to continue sipping their coffee or smoking a cigarette when they hear an alarm going off warning of imminent danger. “Otherwise, it’s unbearable,” she said.

Despite the dark story, however, it was very important for the director to suggest hope at the end of the film, according to Adler.

“Even though [the characters] go through difficulty, [they show that] there’s a possibility of rebirth and love.”