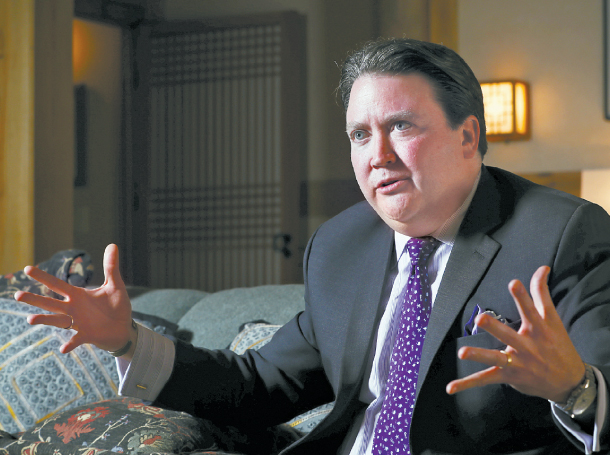 Marc Knapper, charge d’affaires ad interim at the U.S. Embassy in Seoul, talks to the JoongAng Ilbo on Friday at the Habib House in central Seoul. [KIM KYUNG-ROK]

The United States and China share the goals of denuclearizing North Korea and integrating it into the global economy, said the U.S. acting ambassador to South Korea in an interview with the JoongAng Ilbo on Friday.

“We have challenges in our relationship with them [China] over the South China Sea and trade,” said Marc Knapper, charge d’affaires ad interim at the U.S. Embassy in Seoul. “But when it comes to North Korea we have shared goals and will continue to find overlapping interests.”

In an interview at Habib House - the residence of the U.S. ambassador in downtown Seoul - Knapper emphasized the importance of an international coalition in bringing Pyongyang to the negotiating table. “China has played an important role and we appreciate their role in participating in the international pressure campaign and we expect them to continue to enforce resolutions as a permanent member of the UN Security Council.”

A diplomat with a long career at the State Department, Knapper has extensive experience dealing with North Korean issues, having traveled to Pyongyang in 1997 as part of the official team that inspected the Yongbyon nuclear facility, and again in 2000 as part of the advance team for then-Secretary of State Madeleine Albright’s visit to North Korea.

His outlook on the upcoming U.S.-North Korea summit in Singapore struck a positive tone, albeit with reservations echoing President Donald Trump’s propensity for the phrase, “We’ll see.”

“Our efforts with North Korea are opening up a new chapter in a long string of U.S. efforts to try to ensure this remains a peaceful region and one of the primary economic drivers of the world,” he said.

Regarding potential security assurances the United States can provide in exchange for North Korea’s denuclearization, Knapper underscored that the U.S. has made clear its lack of “hostile intent towards North Korea.”

“Since the end of World War II, the U.S. has tried to promote peace and prosperity and…never advocated the use of force to change the status quo,” he said.

The interview covered the U.S. government’s position on rapprochement with North Korea ahead of the summit and addressed American objectives surrounding the denuclearization process.

Q.President Trump praised Kim Jong-un for trying to bring North Korea into the “real world.” Does this demonstrate the president’s belief in Kim’s sincerity?

A. I’d like to go back to President Trump’s speech in November when he eloquently laid out his vision for relations with North Korea. On one hand he mentioned the diplomatic and economic pressure campaign on North Korea, but at the same time he was holding out hope for a brighter future. Provided the North Korean leadership makes the right choices to move away from isolation and confrontation, there can be a brighter future for the country and the people, in economics and human rights. What the president is referring to when he says the “real world” is that Kim Jong-un has started to make these changes. We want the North Koreans to have better lives.

But has there been a fundamental strategic change? I think we still have to see. That’s why our two leaders have to sit down and see whether this is a long-term decision or a short-term tactical decision. So far the signs are good and we have seen positive things.

Based on U.S. contact with North Korea, were there any hints from Kim on pursuing economic development based on the Chinese or Vietnamese models?

We have to see. There’s a lot of talk about a peace regime or economic assistance and all that sounds wonderful, but first things first: denuclearization. First North Korea must respond to the will of the international community by ending their nuclear and missile programs. The sky is the limit if this happens. But our focus now is on denuclearization.

Some people say that Kim is playing both sides of the fence with the United States and China. What do you make of this?

I think it’s great that he is engaging in diplomacy. For so long we haven’t heard from Kim Jong-un except for the occasional nuclear test or missile launch. It’s fantastic that he is meeting with all these leaders; the more he hears directly from other leaders, the more he will understand how much of an outsider his country has become and how much it stands to gain by giving up its nuclear program.

But I also think that when you say he’s playing both sides, this implies that it’s a zero-sum game between the United States and China, and it isn’t. We share the goal of denuclearizing the North and better integrating the North into the regional economy. Also, President Trump talked on the phone with Xi Jinping after Kim visited Dalian; it’s not like a game of diplomacy in 19th-century Europe, we’re all talking to each other.

How do you assess the inter-Korean summit on April 27?

My government and the rest of the world watched the summit with fascination and a great deal of emotion; it was a moving experience. We recognize the historic nature of this event. I was here in 2000 during the first inter-Korean summit and went to Pyongyang with Secretary of State Madeleine Albright, so I have a personal attachment to North-South issues. I sincerely wish that this leads to peace, reconciliation and better lives for Koreans.

I have to say that the immediate process began with the Winter Olympics but we have to go back further to the relationship between Presidents Trump and Moon. They trust each other and share the view that denuclearization and dialogue go together. Our success has been predicated on shared commitment to maximum pressure and dialogue. We appreciate President Moon’s commitment to the pressure campaign until we reach our denuclearization goals.

How is the North Korean situation different from the first inter-Korean summit of 2000, when President Kim Dae-jung met Chairman Kim Jong-il?

I think a key difference between then and now is the involvement of the international community. Back then, the United States and other nations certainly were watching North Korea closely, but weren’t as committed to the issue as they are now. The full international community is behind the pressure campaign and desire to see human rights and the economic situation in North Korea improve.

It is very different from 2000, since back then North Korea had not tested nuclear missiles. This was the key factor in increased global interest.

Some people say that since Pyongyang already possesses knowledge of nuclear arms, they can always reengage in development even if they discard their arsenal for now. Is addressing technical knowledge and personnel part of the summit agenda?

I’m not an expert on arms control or denuclearization, and my guess is that all this will be discussed when we follow up the summit on an expert level. This includes warheads, missiles, research and development facilities, storage, reprocessing, manufacturing plants as well as personnel. I can’t give you an answer on what we will talk about. When we talk about denuclearization, the focus is on removing what they have now and their potential to go back.

A lot has been made of these differences in terms, but I urge people not to read too much into their use. The focus should not be on the shorthand of these terms but on denuclearization. Certainly if we look at the North’s other illegal activities, they include chemical and biological weapons. We want to tackle all of these in the fullest of time. Just because we haven’t mentioned these other forms of weapons of mass destruction doesn’t mean we’re not interested, but right now the focus is on their nuclear program.

At the inter-Korean summit there were talks about a peace treaty following trilateral or four-party negotiations. How do you think this will proceed?

Some have criticized President Trump by claiming the upcoming summit is tantamount to legitimizing violations on human rights in North Korea. Will human rights be discussed in the summit?

I’ve certainly heard about these criticisms but they are far from the truth. We are meeting to solve the denuclearization problem. There is no way that our meeting legitimizes human rights violations. The U.S. is clearly on record regarding the human rights situation in North Korea. Last week we commemorated international North Korean human rights week in Washington and spoke strongly on the issue. The week before that we issued a human rights report. This is not something we will let up on. When President Trump mentioned a brighter future, we are prepared to help them if they begin to make right decisions and this includes helping them on human rights.

Do you think Korea will be reunified in your next posting here?

I’d love to come back and I sincerely hope unification happens whether I am here in Korea or not. I’m blessed to be here during these important moments and it is an honor to serve. Though we have no ambassador at the moment we’ve got a great team.