Kim must send his nukes to U.S.: Bolton

Kim must send his nukes to U.S.: Bolton 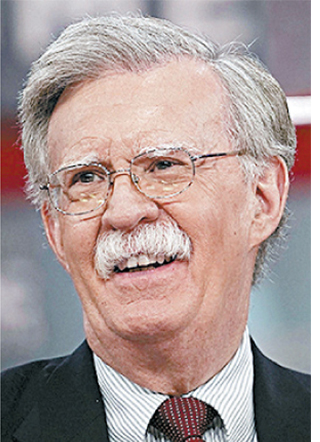 “We want to see the denuclearization process so completely underway that it is irreversible,” said Bolton in an interview with ABC News Sunday, before Pyongyang will be able to reap any sort of benefits.

“The implementation of the decision means getting rid of all the nuclear weapons, dismantling them, taking them to Oak Ridge, Tennessee,” said Bolton, as he revealed details of the process the Trump administration may demand in denuclearizing North Korea.

It also includes “getting rid of the uranium enrichment and plutonium reprocessing capabilities,” said Bolton. Also addressed will be the North’s ballistic missile program, he said, as well as its chemical and biological weapons.

Bolton said that the International Atomic Energy Agency (IAEA) has “a role,” but that the “actual deconstruction” of the nuclear weapons “will be by the United States, perhaps with the assistance from others.” Washington, he said, hopes to “do it very quickly.”

Oak Ridge was where Libyan centrifuges and nuclear weapons development equipment were shipped during the George W. Bush administration in 2004 after British and U.S. weapons experts engaged in dismantling, destroying and removing Libyan weapons technology. It was once the headquarters of the secretive Manhattan Project during World War II to make the world’s first atomic bomb.

North Korea on Saturday announced that it would dismantle its Punggye-ri nuclear test site between May 23 and 25 and invite international journalists - from China, Russia, the United States, the United Kingdom and South Korea - to cover the demolition ceremony to “ensure transparency.” This move comes ahead of a historic summit between Trump and North Korean leader Kim Jong-un scheduled for June 12 in Singapore.

Bolton has previously pushed for the Libya model of denuclearization, in which the late Libyan leader Muammar Gaddafi disposed of his country’s weapons of mass destruction as a precondition for sanctions relief in a 2003 agreement. Gaddafi’s fall from power and death at the hands of rebels in 2011, eight years after he signed the disarmament agreement, has been seen by North Korean leaders as a reason to hold onto their nuclear weapons to ensure regime survival.

Bolton underscored in the ABC News interview that the permanent, verifiable and irreversible denuclearization, or PVID, of the Korean Peninsula is “something that has to happen before…the benefits start to flow,” and that “the objective for North Korea is to see whether they want to become a normal nation.”

Trump is “very optimistic because he sees the chance of a breakthrough,” he said, but also remains realistic and doesn’t have “stars in his eyes over this.”

Bolton continued, “I think what we need to see from Kim Jong-un is that he and the entire North Korean regime have made a strategic decision that they will be better off without weapons of mass destruction.”

He said that “one advantage” of having the U.S.-North Korea summit so soon “without months and months and months of preparation” is that Trump will be able to “size Kim Jong-un up and see whether the commitment is real.”

Bolton pointed out that signing off on “the complete ending of the nuclear program in one day” is not likely, but added that the United States is “very much interested in operationalizing the commitment as quickly as possible - and that is in North Korea’s interest.

If Kim makes the choice to give up his nuclear capabilities, Bolton said the United States is “prepared to open to trade and investment with North Korea as soon as we can.”

He echoed an offer made by U.S. Secretary of State Mike Pompeo that the United States is prepared to work with North Korea to achieve economic prosperity if it takes bold action to quickly denuclearize.

“I think this first meeting is going to be on the critical issue primarily of denuclearization,” said Bolton, but other issues that could be addressed include Japanese abductees, South Korean detainees and other human rights concerns.

“And I think it would be a factor for American businesses, other foreign businesses, about whether they’re going to be involved in investment in North Korea if the climate doesn’t change.”

On the same day, Bolton said on CNN’s “State of the Union” that the United States is still pursuing “complete, verifiable and irreversible denuclearization,” or CVID, heading into negotiations with North Korea, and that covers “all aspects of their nuclear program.”

Referring to the 1992 joint North-South denuclearization agreement, he added Pyongyang already “committed to give up both the front and the back ends of the nuclear fuel cycle, both uranium enrichment and plutonium reprocessing.”

He clarified again that the ballistic missile program used to deliver nuclear warheads “has got to go.”

When asked what Washington is prepared to offer Pyongyang, since Trump has already indicated that reducing U.S. troops in South Korea is not on the table, Bolton did not give specifics, but replied, “The prospect for North Korea is unbelievably strong, if they’ll commit to denuclearization…That’s what the president is going to say.”