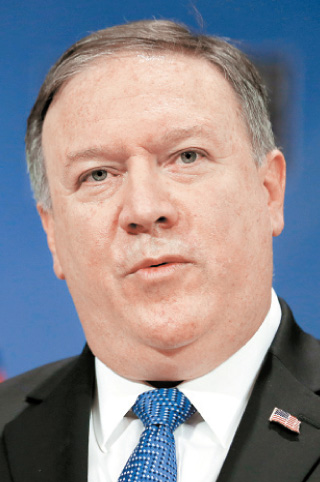 U.S. Secretary of State Mike Pompeo said American private investors will be allowed to do business in North Korea’s energy, agricultural and technology sectors if the regime completely denuclearizes, stressing Pyongyang will “certainly” be relieved of sanctions and be given “more” as well.

Pompeo made the remarks during an interview with Margaret Brennan on CBS News’ “Face the Nation” that aired on Sunday, shortly after his return from Pyongyang to meet North Korean leader Kim Jong-un to lay the groundwork for Kim’s landmark summit with U.S. President Donald Trump on June 12 in Singapore, and to negotiate the release of three Korean-Americans detained by the regime.

The interview, in part, fleshed out Pompeo’s statement last Friday that the United States was ready to help North Korea achieve economic prosperity if it denuclearizes, a rare comment from an administration whose North Korea policy has so far been built on threats and maximum economic sanctions. Pompeo’s earlier statement was made during a press conference following his meeting with South Korea’s Foreign Affairs Minister Kang Kyung-wha in Washington.

“North Korea is desperately in need of energy support - electricity for their people,” Pompeo told CBS News on Sunday. “They are in great need of agricultural equipment and technology…We can deliver that…We can create conditions for real economic prosperity for the North Korean people that will rival that of the South, and that is our expectation.”

Pompeo stressed that U.S. tax money won’t be used for this process.

“It will be American know-how, knowledge entrepreneurs and risk-takers working alongside the North Korean people to create a robust economy.”

If the North proves America is no longer at risk of its nuclear weapons by demolishing them as well as its chemical and biological weapons program and missiles, said Pompeo, “We will ensure that your people have the opportunity for the greatness that I know Chairman Kim [Jong-un] wants them to have.”

On his personal impression of Kim, Pompeo said the North Korean leader was “very knowledgeable in the sense of he knows the files.” The state secretary continued, “He’s very capable of engaging in complex set of discussions. When I ask him a question about something that’s a little off, he answers it. There’s no note cards.”

In a separate interview with Chris Wallace of “Fox News Sunday,” Pompeo said American private investment in the North would help North Korean people “eat meat and have healthy lives,” so long as the regime delivers complete, verifiable, irreversible denuclearization.

American private investors will help the North, Pompeo said, “build out the energy grid…to work with them to develop infrastructure, all the things that the North Korean people need.”

Washington had remained silent on economic cooperation with North Korea until recently, leaving many to wonder whether Trump would suggest specific incentives to Kim when they meet next month for the first summit between the two countries.

A high-level South Korean government official, who spoke on the condition of anonymity, said Monday that Seoul explained to Washington multiple times through “various routes” that the United States could benefit from economically engaging with North Korea because the reclusive country had market value.

Director Suh Hoon of the National Intelligence Service, South Korea’s spy chief, is said to have personally told Pompeo that pressure wasn’t enough to change North Korea, and that if the United States convinced the regime to open up its market, that itself could lead the regime towards denuclearization, according to another South Korean government official.

The Panmunjom Declaration, signed between Kim and South Korea’s President Moon Jae-in on April 27 during their summit, made no mention of economic cooperation. But when Moon later stood in front of cameras with Kim after signing the declaration, he said he looked forward to seeing both countries start joint research on ways to resume joint economic projects and implement an inter-Korean declaration signed on Oct. 4, 2007, when then-Korean leaders Roh Moo-hyun and Kim Jong-il agreed to promote balanced economic growth and co-prosperity. Local government offices and companies have since been preparing for a possible resumption of South-North trade.