Hanwha Eagles’ fans cheer for the team during the Eagles’ game against the NC Dinos at Daejeon Hanbat Baseball Stadium on May 11. [KIM SUNG-TAE]

The Eagles have landed - well, nearly. 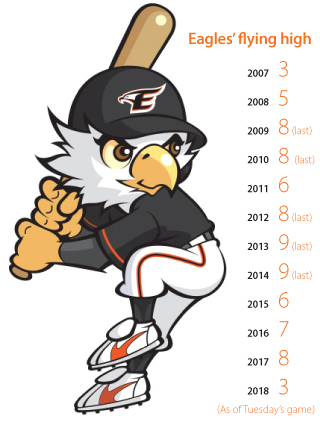 They may not be in first place, but after 10 years languishing at the bottom of the table, the Hanwha Eagles have finally returned to the upper reaches of the KBO. Fans of the Daejeon-based team, with a fierce loyalty hardened by a decade of disappointment, are flocking to the Daejeon Hanbat Baseball Stadium, which sold out for the fourth time this season on Sunday.

The Daejeon club is currently looking good in third place, with a strong performance over the last two weeks bringing fans flooding into the stadium. The Eagles currently lead the KBO in the number of sellout games - during Sunday’s game all 13,000 tickets sold out 50 minutes before the start of the game. Excitement over the Eagles’ sudden resurgence is so high that fans of the team that couldn’t get tickets gathered around the stadium, watching the game on their phones.

Despite heavy rain throughout the day on Saturday, optimistic fans were still picking up tickets. That game also sold out, although it doesn’t count toward ticket sales records as it was called off because of the weather.

Baseball fans in Daejeon have good reason to be excited. When the Eagles failed to advance to the postseason last year they tied the record for the longest playoff drought, at 10 seasons. Despite finishing in last place for five of the last 10 seasons, Eagles fans have never given up on the men in orange and black. In fact Eagles fans, who can often be heard cheerfully chanting “It’s good to win but it’s O.K. to lose” across Hanbat stadium, are nicknamed the “Buddhist Saints” due to their patience and staunch loyalty.

But that long wait may be over. This season, all indicators suggest that the Eagles have a very good chance of advancing to the postseason for the first time in 11 years. There may be a lot of games left to play, but there’s no indication that the Eagles can’t continue their current form for the rest of the season.

The Eagles’ success at the beginning of the season doesn’t seem to be a temporary thing. The Eagles have picked up 22 wins in 39 games, with 12 wins taken in come-from-behind victory. The club picked up its 20th win in its 36th game of the season, the fastest it has reached 20 wins in the last decade.

“Over the past few years, I got nervous [watching the game], expecting the players to make mistakes,” said one Eagles’ fan. “At times, the players seemed like they were forced to play. But this year, they seem happy. If they keep on enjoying baseball, I’m sure the Eagles will play in the postseason.”

The Eagles’ lost decade went right the way up to top management. For years it has seemed like the position of Eagles’ manager was cursed, as some of the biggest names in the KBO have tried and failed to get the team back on track. Famous managers like Kim In-sik, Han Dae-hwa, Kim Eung-ryong and Kim Sung-keun have all attempted to lead the struggling team to no avail.

When Kim Sung-keun was appointed as manager in 2015, it looked like things might be different. Kim, with 1,386 KBO wins and three Korean Series titles under his belt, seemed like the perfect man to lead the Eagles to victory. Instead, he was forced to leave halfway through the season last year after falling out with the owners. After Kim resigned, the Eagles had to make do with an interim coach, Kim Sang-kun.

This season, under new manager Han Yong-duk, the fans are no longer worried. Han focused on keeping the team healthy by regularly rotating the bullpen pitchers. As a result, the Eagles are the only team in the KBO to have their bullpen’s ERA below 4.00s. The Eagles’ closer, Jung Woo-ram, who only pitches one inning, currently leads the league in saves at 14.

The two bullpen pitchers - Seo Kyun and An Young-myung - have played a crucial role in the Eagles recent success. Seo has picked up six holds with a 0.00 ERA and An has taken five holds with an ERA of 1.90 as of Sunday’s game.

Han’s trust in the club’s two foreign pitchers is also starting to pay off. Both Sampson Keyvius and Jason Wheeler got off to a slow start, but Han allowed them to keep their spots in the rotation, allowing them time to adjust to the Korean league. And respond they did - Sampson threw seven and one-third scoreless innings against the NC Dinos on Sunday to pick up his third win of the season.

“On the days Sampson starts, I don’t feel worried,” said Han. “He has become our team’s ace.”

Wheeler is also starting to find his feet, picking up his second win of the season against the Nexen Heroes on May 9, tossing five and one-third scoreless innings.

Aside from the foreign pitchers, the Eagles’ foreign batter Jared Hoying has become one of the leagues’ dominant foreign players, with a batting average of 0.345 with 12 home runs and 33 RBIs as of Sunday’s game.

Han’s leadership hasn’t gone unnoticed - a growing number of Eagles fans are turning up to games wearing uniforms with the manager’s name on the back.