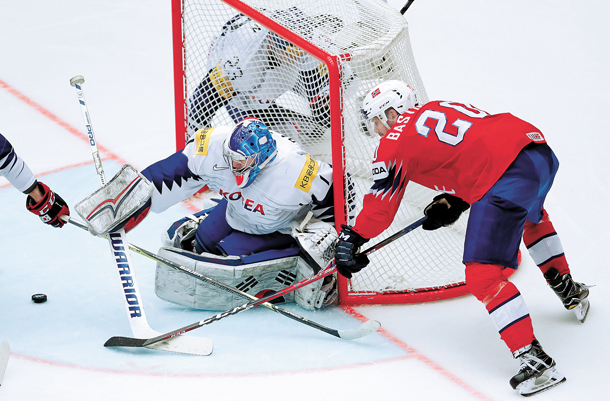 Korea has been relegated to the second division in the men’s hockey world championships.

Korea, ranked 18th, was shut out by world No. 9 Norway 3-0 to close out the International Ice Hockey Federation (IIHF) World Championship in Herning, Denmark, on Monday, with its seventh straight loss.

Korea, the lowest-ranked participant, finished last among eight nations in Group B with zero points. The last-place teams from each of the two groups will be sent down to the second-tier, Division I Group A tournament for 2019.

Korea had a power play goal called back on goalie interference by Park Woo-sang 50 seconds into the game, and never recovered from the overturned play. Norway scored two power play goals, including one midway through the third period, to build a 3-0 lead, and outshot Korea 30-17.

Korea earned a promotion to the top world championship after finishing in second place at last year’s Division I Group A event. But since the IIHF adopted the current promotion-relegation system for its world championships in 2012, only one team, Austria in Group A at this year’s tournament, has survived the top competition a year after getting promoted from Division I Group A.

Korea had to defeat Norway in regulation to stay in the top competition, but the team’s penchant for taking penalties and inability to kill them proved costly.

Korea thought it took a 1-0 lead in the opening minute, when Ahn Jin-hui’s point shot trickled in between the pads of the goalie Lars Haugen with Park Woo-sang planted at the top of the crease. But Norway asked for a review of the goal, as Park made contact with the goaltender just inside the crease before the shot. The goal was eventually wiped out.

Korea kept attacking for a few more minutes, but committed a too-many-men penalty at 12:40 - its third of the tournament - and Norway scored 55 seconds into that power play.

Mathis Olimb fanned on a shot attempt from the right wing, but retrieved the loose puck and fed Tobias Lindstrom for a one-timer from the left circle past goalie Matt Dalton.

Korea entered this game as the worst penalty-killing team in the tournament, with a dismal success rate of 61.5 percent, having previously allowed 15 goals in 39 power play chances by the opponents.

The teams were scoreless in the middle frame, though Korean forward Shin Sang-hoon came close when he hit a goal post on a one-on-one chance about five minutes into the period. Otherwise, Korea didn’t play with any urgency of a team facing relegation.

Norway gave itself some breathing room with a goal by Thomas Valkvae Olsen at 6:55 in the third period. Anders Bastiansen secured the puck in the corner and attempted a wraparound. Korean defenseman Eric Regan fell down trying to catch Bastiansen, who ended up sending the puck right through the crease to set up Valkvae Olsen’s easy tap-in.

Moments later at the other end, defenseman Kim Won-jun hit a goal post with a point shot for Korea, and that was as close as the team came to scoring the rest of the game.

Norway sealed the deal with a power play goal by Jonas Holos at 10:02 mark. Defenseman Bryan Young was penalized for delay of the game when he cleared the puck over the glass, and Holos’ slap shot from the point, set up by Ken Andre Olimb, squeaked through Dalton.

No. 1 goalie Matt Dalton was pulled twice during the tournament, with Korea getting outshot in every game. In seven losses, Korea put 120 shots and allowed 290 shots.