In Ju-yeon, fresh off her first win, has been waiting for this moment

In Ju-yeon, fresh off her first win, has been waiting for this moment 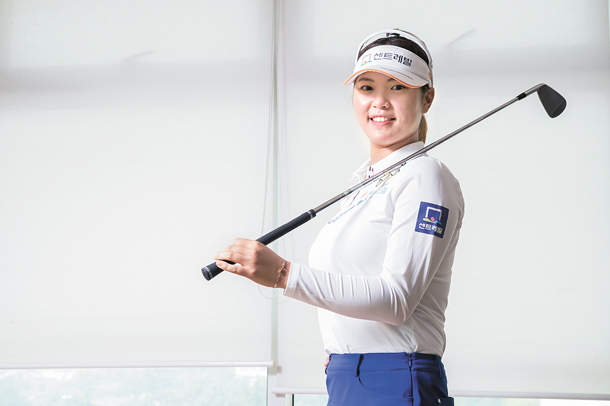 In Ju-yeon’s win at the NH Investment & Securities Ladies Championship on Sunday may have come as a surprise to some, but for the fourth-year KLPGA golfer, it was a long time coming.

“I still can’t believe that I won,” In said. “I received about 200 messages congratulating me on my win.”

After going through two playoff holes, In picked up her first KLPGA Tour win at the NH Investment & Securities Ladies Championship on Sunday. The 21-year-old golfer has gone through a lot to get to the title - 59 tournaments, to be exact.

In was always athletic, but she never planned on becoming a professional golfer when she was little. She picked up a club for the first time when she was 12, but quit right away after finding the sport boring. Instead, she chose track and field and taekwondo.

“Unlike track and field and taekwondo, which are dynamic, golf is quiet,” In said. “Since I thought golf wasn’t right for me, I hated it at first. But once I started hearing compliments for hitting far, I focused on golf only. I didn’t see anyone [my age] hitting further than me.” At one point in high school, her drive went as far as 280 yards.

Although In started later than others, she also improved quicker than others. She was selected to join the national team when she was 18.

While she managed to leave an impression as a golfer, In had challenges outside the golf course. She moved into a studio apartment by herself when she was 14 to live closer to a practice range. Meanwhile, her family struggled to finance her golfing activities, barely able to pay for her cart fees, the caddie and equipment changes.

When she joined the national team, she fell behind her competitors Choi Hye-jin, Park Gyeol and Kim Ji-young. “There were players that played a lot longer than me, and I wasn’t hitting it well either,” In said. “There were times when I blamed myself asking ‘Why am I on the national team?’ Since I also had family issues, I regularly thought of quitting.”

Despite the hardship, In felt like she couldn’t let down her mentor, PGA golfer Choi Kyung-ju. In high school, she attended an annual winter training session hosted by Choi’s foundation and received a scholarship from his organization. When she was on the Dreams Tour, the KLPGA’s second-tier tour, Choi provided In with financial and emotional support. “Be humble all the time,” he used to tell her.

In didn’t expect her first win to come so soon. “This is just the beginning,” she said. “I want my career to continue for the next 10 years. I won’t get full of myself from this win. I’ll continue to be a humble golfer, In Ju-yeon.”