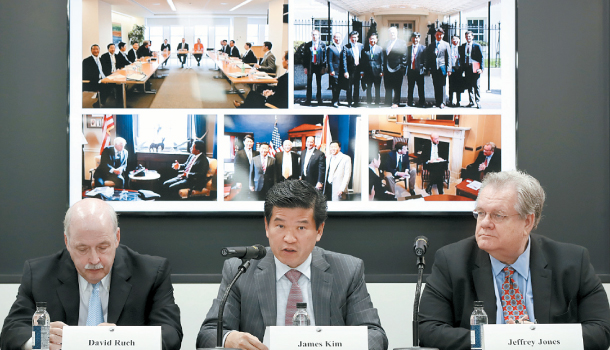 From left: Amcham Vice Chairman David R. Ruch, Chairman and CEO James Kim and Jeffrey Jones, the chairman of the board of governors at Amcham Korea, answer questions from reporters about their meetings with U.S. government officials during this year’s “doorknock” visit to Washington on Tuesday. [YONHAP]

U.S. business leaders on Tuesday said that Koreans may be able to enter the United States without having to stand in long lines or speak with customs officials at airports starting early next year.

To sidestep lines and the “difficult and sometimes threatening” interviews when they enter the U.S., about 1,000 out of 7 million Koreans with valid passports have enrolled in the global entry program while on trips to the North American country.

In their annual “doorknock” meetings with members of Congress and senators, U.S. business leaders at the American Chamber of Commerce in Korea (Amcham) last month said Washington officials were very supportive about offering the global entry program to Koreans sooner.

“I will be going back to Washington in July to follow up and help begin the execution of the global entry process [for Koreans],” said Amcham Chairman and CEO James Kim, adding that WeWork, a member company, has worked on several similar programs in the United States.

Amcham Vice Chairman David R. Ruch expected Korean nationals will likely benefit from the global entry program as early as the first quarter of next year.

“The fiscal year really determines the timeline. The U.S. fiscal budget runs from October through September, so it’s unlikely that we will see much movement toward the start of the next fiscal year,” Ruch said.

With visa waivers and global entry, more businesspeople are expected to travel to the United States without worrying about entry interviews, said Jeffrey Jones, chairman of Amcham’s board of governors.

The move will also help U.S. carriers, such as United Airlines and Delta Air Lines, and Korean airlines such as Korean Air Lines and Asiana Airlines boost their financial results, he said.

The U.S. business leaders said the trade balance situation between Korea and the United States has improved considerably when both goods and services are considered.

The trade deficit in goods decreased to $22 billion in 2017 from $27 billion a year earlier. The U.S. has posted a trade surplus in services with Korea, with an average of 10 percent growth annually since 2011, Amcham said.