G-Class lives up to its legacy

G-Class lives up to its legacy 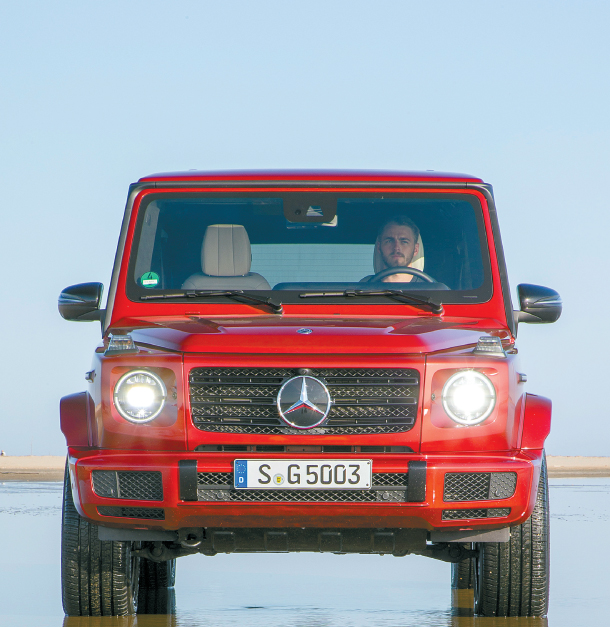 LANGUEDOC-ROUSSILLON, France - There are few vehicles as iconic as the Mercedes-Benz G-Class. So when it came time for the automaker to refresh its long-running SUV, Mercedes knew it couldn’t just follow the latest trends in the industry. It had to stay true to the G-Class legacy. 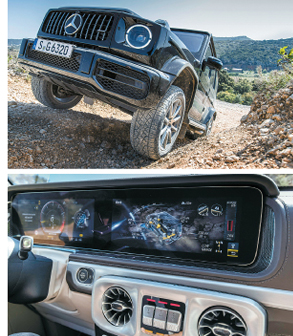 Top: The G 63 model on an off-road course in Languedoc-Roussillon, France, in April. Above: The 12-inch digital cluster inside the new G-Class. [MERCEDES-BENZ]

Mercedes’ most recognizable SUV isn’t just a capable off-roader. Its retro charm makes it a fashionable choice - that is, if you can afford one.

The old SUV’s capabilities left drivers with some inconveniences on the road, though. Its bulky body made it hard to steer the car through congested urban roads, and its steering wheel felt heavier than the other cars. The G-Class’ sturdy suspension was noisy, and the shock from the road came through almost unfiltered to the passenger and the driver seats.

In order to address some of the SUV’s refinement issues, Mercedes-Benz rolled out an all-new G-Class model for the first time in 39 years. The iconic SUV has been reworked countless times since it was introduced to the world in 1979 as the Gelandwegen, but this is the first-ever full overhaul to the vehicle.

It’s a challenge to revamp a vehicle as successful as the “G-Wagen,” according to Mercedes-Benz officials, especially when it’s become an automotive icon.

“G-Class had to compete with its predecessors,” said Ian James, the marketing manager of the G-Class, to Korean reporters in April in France. “It was a challenge for us to satisfy the G-Class’ existing fan base and attract younger and vibrant new customers as well.”

The Korea JoongAng Daily got a firsthand experience of the new G-Class’ two models - the G 550 and the performance-oriented AMG G 63 - in the picturesque city of Languedoc-Roussillon in southern France.

After arriving at Perpignan Airport, this reporter was given a chance to drive the AMG G 63 model to the first destination for about an hour and a half. The 70-kilometer (43-mile) course was full of curvy and narrow rural roads, providing a perfect opportunity to test out the car’s agility. At some point, the road got so narrow that only a single car could pass by.

It would be a lie to say that the car felt as keen on the road as ordinary sedans or other SUVs geared for urban driving. But the vehicle reacted quickly and precisely to even the demands of a first-time G-Class driver.

When this reporter found herself on a straight-line part of the route, she switched over to Sport and Sport+ mode to really test out its performance. Although the G-Class’ AMG model is designed to ride more comfortably on urban roads compared to its G 550 counterpart, the truck had beast-like acceleration. Officially, it takes just 4.5 seconds to reach 100 kilometers (62 miles) an hour. The growling engine sound that comes out in Sport and Sport+ modes made driving fast even more exciting.

What was more surprising, though, was how polite the car gets when it has to behave itself. When switched back to Comfort mode, the growling engine note disappears, and the sound coming from the wind and the road is muffled.

Mercedes, this time around, added partially autonomous driving technology to the G-Class. But the Mercedes made sure to keep it to a minimum.

“Each class at Mercedes-Benz has its priority, and for the G-Class, it is certainly not installing the maximum amount of autonomous driving features,” said Andreas Hoeppel, the head of G-Class product management. “The G-Class focuses on the authenticity of luxury and off-road course, while the S and the E-Class focus on self-driving features and the A-Class infotainment features.”

The G-Class’ electromechanical steering wheel controls features like parking and lane keeping assist. If drivers veer slightly out of their lane on a highway, the steering wheel vibrates to warn them.

The 12-inch digital cluster that takes up two-thirds of the SUV’s dashboard contributes to its tech-savvy impression. Although is not a touchscreen, the massive screen provides a three-dimensional graphic image of the car when driving on an off-road course to provide the data necessary for a safe drive.

Although the new G-Class has many improvements, the carmaker had to make sure some elements were carried over to the next generation.

According to Hoeppel, the legacy features from the last G-Class are the push-button door handles, pop-up turn signals on top of the hood, the tow bar on the dashboard in front of the passenger seat, the spare tire attached on the back of the car and the differential lock for off-roading.

Mercedes-Benz’ differential locks comes with three settings, and they help the driver keep control of the four wheels. By locking the differentials, the driver can control the vehicle’s movement more precisely depending on the road conditions.

It was a horrifying yet thrilling experience to be behind the steering wheel of a car that could go over a 45-degree uphill slope and plow through 70 centimeters (28 inches) of muddy water. It also managed to tackle a 35-degree incline, but the G-Class felt as if it was just about to tilt over to the side. While most G-Class drivers probably won’t put their SUV, which will cost over 100 million won ($93,050), at risk like this, it proved itself nonetheless.

Mercedes added a function called G-Mode, which adjusts the damping of the chassis and the steering, to ramp up its off-road performance. As soon as the differential locks are activated or the low range off-road gear is engaged, G-Mode is automatically turned on.

Executives at Mercedes-Benz’s G-Class team said that Korea is a “focus market” for the premium off-road SUV model, as the vehicle’s fan base here is growing.

“Korean consumers buy the G-Class because they want a mixture of performance, as well as the need to differentiate themselves from others on roads,” said Hoeppel. “They are like the connoisseur of cars.”

The new G-Class will arrive in Korea in the third quarter of this year, according to a Mercedes-Benz Korea official.

The AMG G 63 will come first, followed by the G 500 model. A diesel model might be offered, but it hasn’t been decided on yet.