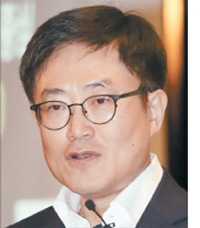 Lotte, stung by its archrival Shinsegae’s success in the online shopping business, announced a plan Tuesday to invest 3 trillion won ($2.79 billion) in its e-commerce operations.

During a presentation on Lotte’s e-commerce business strategy on Tuesday, Lotte Shopping CEO Kang Hee-tae announced that the retail giant plans to launch a comprehensive online shopping platform that will integrate all eight of Lotte’s online stores by 2020. Lotte Group will form a new business department wholly dedicated to developing its e-commerce business in August.

“Lotte plans to dedicate 500 billion won to developing the online and mobile service platform,” Kang said. “It will invest 1 trillion won in systematizing distribution and logistics and 1.5 trillion won for marketing.”

Lotte Shopping and Lotte Group will each invest 1.5 trillion won in the project.

Lotte.com, which was the first e-commerce site from a Korean conglomerate when it launched back in 2000, has fallen behind industry rival Shinsegae’s SSG.com, which offers products from its discount chain Emart and Shinsegae Department Store.

Lotte’s plan follows Shinsegae’s announcement in January that it would invest over 1 trillion won in a new company that will oversee Shinsegae’s entire e-commerce business.

During the presentation, Kang gave a nod to his rival’s performance in the domestic e-commerce industry.

“As a competitor, we admit that Shinsegae is a step ahead of us,” Kang said. “But with our various distribution channels and number of registered customers, Lotte will be able to achieve superiority once we set up our new platform.”

Lotte is banking on its large number of registered customers and offline stores to strengthen its e-commerce business.

Lotte has 11,000 retail stores in Korea, the most of any conglomerate. These outlets will help Lotte attract customers with services like smart pick-up, launched in 2016, which allows customers to pick up goods ordered online at Lotte affiliates. Lotte Logistics, the group’s distribution arm, facilitates the process.

Kang added that Lotte will gain an edge over its competitors by providing a superior customer shopping experience using artificial intelligence such as IBM’s Watson, a cognitive computing program. Lotte plans to eventually add voice-recognition capability to its e-commerce platform so customers can receive product recommendations.

Lotte Shopping aims to rack up more than 20 trillion won in online sales by 2022. In 2017, Lotte’s online sales revenue amounted to 7 trillion won, or 18 percent of the conglomerate’s total retail sales.