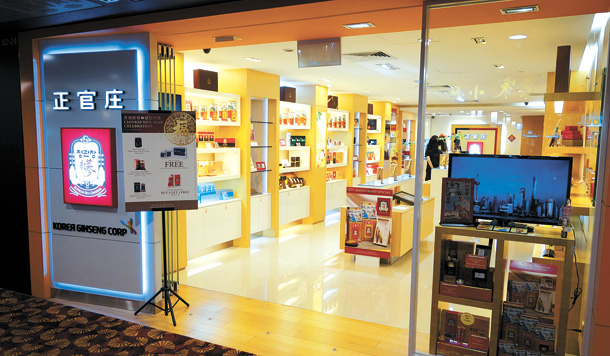 SINGAPORE - In Singapore’s Chinatown is an old medicine house selling dried herbs and other traditional medicine like swallow’s nests. The walls are lined with glass cabinets filled with ornate gold and red metal tins, the quintessential image of a Chinese medicine shop. But look a little closer, because those tins aren’t from China at all, but are packages of ginseng roots from Korean brand CheongKwanJang.

Wing Joo Loong, a traditional medicine distribution and retail company in Singapore, has imported CheongKwanJang since the late 1940s. The store has even decorated its walls with the Korean company’s metal tins, turning the store into a sort of museum of CheongKwanJang packaging through the years.

“CheongKwanJang takes up 20 to 30 percent of our sales,” said Tan Yan Shao, director of Wing Joo Loong. “When it comes to Korean red ginseng, definitely CheongKwanJang is the best-seller. When you walk around and see smaller medical halls [stores that sell dried medical herbs in small portions], you’ll see a lot of them displaying CheongKwanJang’s metal tins - they’re quite iconic.”

Today, CheongKwanJang sells over 200 products - including ginseng candy, ginseng extract and ginseng pills - appealing to a Korean market that prefers to take its red ginseng in a more accessible form. But its roots were in their iconic red and gold tins that became best-selling products across Asia, and which are still popular today with older customers that prefer to steep ginseng roots in boiling water. 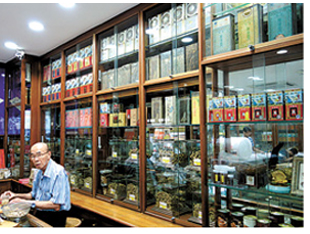 The red ginseng brand may be a household name in Korea, but the CheongKwanJang branding was actually developed for export products - an attempt to show that the ginseng was endorsed by the government and differentiate it from fake Korean red ginseng.

Singapore was one of the earliest Southeast Asian countries to import Korean red ginseng, starting in the 1930s. More than 70 percent of the country’s population are of Chinese descent - another country where ginseng is traditionally consumed for its health benefits.

“[Before, our consumers] were mostly elderly people,” said Tan. “But right now, because of the different processed products like ginseng extract, it’s easier to reach the younger generation.”

Wing Joo Loong was originally a wholesaler, but in the late 2000s, it became CheongKwanJang’s official partner to operate retail stores in the country. There are five local branches operating today.

One is located just a block away from Wing Joo Loong’s headquarters on the basement floor of the Honglim Complex in Chinatown. The store looks very similar to stores in Korea, equipped with over 100 different CheongKwanJang products displayed in a store decorated in red and gold.

“A lot of people come to us after seeing products on social networks,” said an employee at the store. “We see product reviews come up on the internet and some come to us from word-of-mouth.”

Tan said it wasn’t until three to four years after Wing Joo Loong first opened the CheongKwanJang stores that the company started seeing a stable influx of consumers. Tan explained that the initial slow sales were a result of a common superstition that red ginseng heats the body, something consumers in a tropical climate were keen to avoid.

“[There is] more willingness to listen, mainly among the younger generation,” he said, adding that the official store offers an opportunity for staff to change that misconception. “Nowadays so many people travel to Korea and there they will likely be introduced to a ginseng brand - [so] they understand a bit more and get interested.”

The popularity of Korean cultural content has also contributed to recent sales. CheongKwanJang spends money on product placement in Korean television series to reinforce the idea that their red ginseng is a health supplement that can be taken regularly, not just a root medicine for old people.

The hit series “Descendents of the Sun” gave sales a big boost. The male protagonist played by actor Song Joong-ki appeared multiple times on the show drinking “Everytime” ginseng extract, making duty-free sales shoot up by three times year-on-year in the first quarter of 2016 after the show started airing in China.

“For that particular product, the taste is bitter so some customers [who bought it after seeing the show] were unhappy,” said Tan. “But what I can say for sure is that media appearances like that make people aware that this is the biggest brand. So people who tried other brands while traveling in Korea would come back and buy CheongKwanJang.”