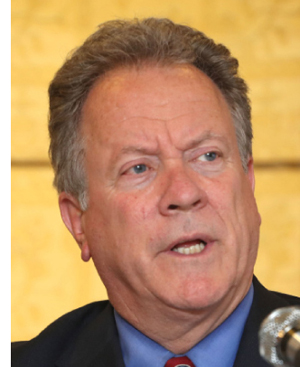 After returning from a four-day trip to North Korea last week, the executive director of the United Nations World Food Programme (WFP) said on Tuesday that he feels a “tremendous sense of optimism” from the country’s leadership that it will turn “a new page in history” amid a whirlwind of diplomacy with the outside world.

“Who would’ve thought we’d be in this sense of optimism three months ago?” David Beasley told reporters at a news conference in Seoul. “While we were granted more access than we’ve ever had [during the visit], we still need greater access, more information and more data.”

Beasley visited North Korea from May 8 to 11 and spent two days in Pyongyang. The rest of the time was spent in rural areas with his team from the WFP. Beasley said he was “fully confident” that there wasn’t mass starvation like during the famine in the 1990s, but there were still issues with hunger and malnutrition.

North Korea requires 6 to 7 million metric tons of food per year to feed its people, Beasley said, but it has only been producing 5 million because of harsh winters, droughts and summer floods, which all create a difficult environment for food production.

In its 2017 report on food security, the WFP estimated 10.3 million North Koreans out of a population of 24.8 million are undernourished, while one out of four children in WFP-supported nurseries are stunted. Many North Koreans are suffering from chronic malnutrition due to lack of essential proteins, fats, vitamins and minerals, according to the report.

When asked whether he discussed the timeline of South Korean donations to the North during his stay in Seoul, Beasley said, “There’s no announcement to be made today.” Last September, the South Korean government said it would give North Korea $8 million worth of aid through two international organizations under the UN but withheld a specific timeline, saying it would be decided “with consideration of South-North relations.”

South Korea’s Unification Ministry said Tuesday that Beasley met with the minister, Cho Myoung-gyon, to talk about the organization’s humanitarian support for North Korea, but did not mention Seoul’s fund. A South Korean government official said discussions were still underway as to when the transaction would be made.