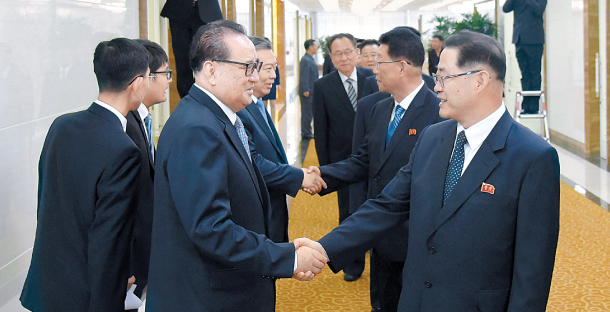 The North’s state-run Korean Central News Agency (KCNA) reported on Tuesday that Pak Thae-song, right, a vice chairman of the Central Committee, led a delegation to China for a friendly visit. [YONHAP]

The North’s state-run Korean Central News Agency (KCNA) reported on Tuesday that Pak Thae-song, a vice chairman of the Central Committee, led the delegation to China for a friendly visit without further elaborating.

The delegation was greeted by a Chinese Communist Party official and North Korea’s ambassador to China upon arrival at the Beijing International Airport Monday. They headed to Diaoyutai State Guesthouse, where foreign dignitaries often stay. They also visited Zhongguancun in Beijing, known to be “China’s Silicon Valley,” which North Korean leader Kim Jong-un visited in late March.

A source familiar with North Korea affairs said that “observing China’s socialist economic system and exchanging experience about ruling the state was an important goal of the Workers’ Party officials’ visit. They want to learn from China’s experience in maintaining a strong one-party Communist system while carrying out economic reform.”

Lu Kang, spokesman of the Chinese foreign ministry, confirmed in a briefing Tuesday that the delegation’s visit kicked off the previous day on the invitation of its Communist Party’s International Liaison Department. Lu added that the North Korean officials visited to “observe economy building and reform in China” and that the two parties also shared experiences on ruling the state.

The previous day, Lu said the two countries “maintain normal exchanges” but did not confirm the visit. North Korea is scheduled to hold a summit with the United States next month and, taking into consideration that the meeting goes well, appears to be eying the prospects of an easing of sanctions and steps to develop its economy.

The North’s Workers’ Party delegation is expected to observe provincial and city governments and discuss economic cooperation with Chinese officials and return to Pyongyang on May 24. Pak is considered to be a key aide to North Korean leader Kim Jong-un and is said to be in charge of science, technology and education policies for the party.

It was reported that the North Korean officials also would brief Beijing officials about U.S. Secretary of State Mike Pompeo’s visit to Pyongyang last week.