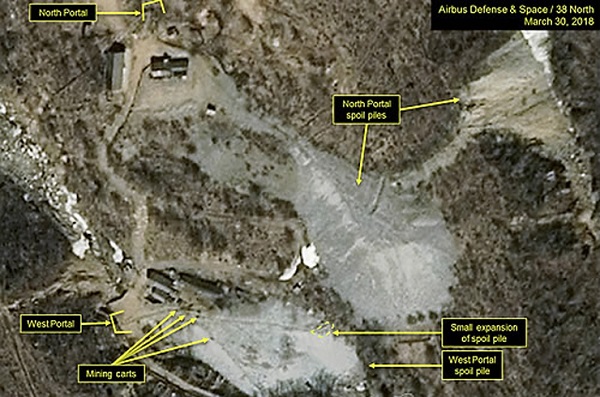 “Five years ago, the United States conveyed that the facilities are an issue,” the diplomatic source well informed on matters of the North-U.S. summit told the JoongAng Ilbo on Monday. “North Korean leader Kim Jong-un is seen to have made up his mind to reveal such facilities as one of the big actions he plans to take” during his upcoming historic meeting with U.S. President Donald Trump scheduled for June 12 in Singapore.

Pinning down North Korea’s plutonium and highly enriched uranium (HEU) fuel for nuclear weapons is a key challenge for North Korean denuclearization, including locating the facilities producing them and estimating the size of the country’s stockpiles of fuel.

American nuclear weapons expert Siegfried Hecker, a professor emeritus at Stanford University, led a group of U.S. scientists to North Korea’s Yongbyon nuclear complex in November 2010. He later said that one facility contained 2,000 centrifuges producing low-enriched uranium but that the facility could be easily be converted to produce HEU bomb fuel — and that parallel facilities could exist elsewhere.

They were the last group of U.S. scientists to make such a visit, and since then, North Korea’s HEU facilities and stockpile have been opaque.

Washington is pressuring Pyongyang to show a clear intention toward denuclearization through action. In turn, North Korea has taken measures such as announcing last Saturday that it will publicly dismantle its

Punggye-ri nuclear test site in North Hamgyong Province between May 23 and 25.
Regardless of what sort of deal Trump and Kim will try to reach during their summit, American officials are adhering to the position that they will not allow a repeat of North Korea pledging denuclearization and then reneging on those pledges as in the past. This could mean that the United States will not immediately lift sanctions on the North in a phased manner, awarding each action.

Specifically, it is not being revealed whether the International Atomic Energy Agency (IAEA) will lead inspections of North Korea’s nuclear facilities or whether it would involve the permanent five, or P5, members of the UN Security Council — China, France, Russia, the United Kingdom and the United States, along with South Korea.

Several key operational support buildings have been razed, rails for mining carts between tunnels have apparently been removed, carts disassembled and small sheds and outbuildings around the site have been removed. North Korea previously announced that the final dismantlement of the site will include collapsing all of its tunnels through explosions, blocking their entrances, and removing all
observation facilities, research buildings and security posts.