Park Seung-hi retires from skating with only a few regrets

Park Seung-hi retires from skating with only a few regrets 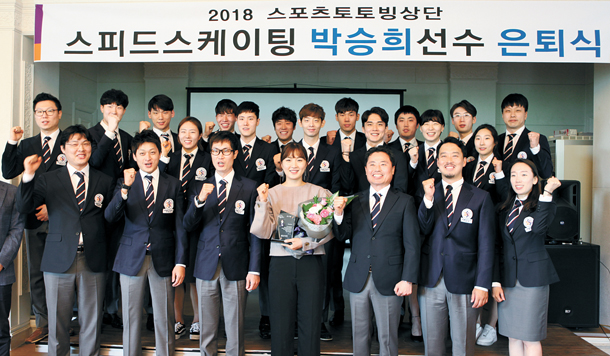 Park Seung-hi, fourth from left in front row, during her retirement ceremony at HS Ville in Gapyeong County, Gyeonggi, on May 10. [YONHAP]

After 17 years on the ice, speed skater Park Seung-hi has hung up her skates to pursue the next chapter of her life as a fashion designer. 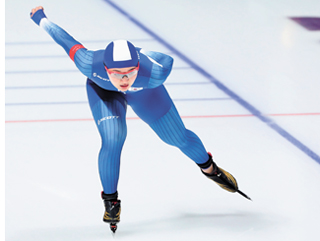 Park Seung-hi skates in the women’s 1,000-meter race during the PyeongChang Winter Olympics at Gangneung Oval in Gangwon on Feb. 14. [YONHAP]

Although her retirement came faster than most in the sport, she has no regrets about starting her new career off the rink. The 25-year-old speed skater may have walked away from the PyeongChang Winter Games without a medal, but her final Olympics was still meaningful for her. She became the only Korean athlete to compete in both short-track and long-track speed skating at the Olympics. In short-track, she is the only Korean to medal in all races at the Olympics.

“I never thought [speed skating] was everything in my life,” said Park, who started skating when she was 8. “I’ll continue to challenge myself in a different career, but I don’t have many regrets.”

After the 2014 Sochi Olympics, Park made the switch to long track. It was a surprise for many fans because she had a successful career in short track. Although there were risks in the change, Park’s positive mindset allowed for an easy transition.

When Park first took up long track, she didn’t have Olympic ambitions. She just wanted to challenge herself with younger skaters. But to her surprise, she made it through the first qualifying event and eventually earned a spot onto the national team to compete in long track at PyeongChang.

On May 10, Park held her retirement ceremony. Although she has no regrets about leaving the sport, she does have one regret from the PyeongChang Winter Olympics: not being able to compete as a short-track skater in front of her many fans.

“I thought it would have been good if I competed as a short-track skater at the PyeongChang Olympics,” Park said. “Since I’ll never get a chance to compete at the Olympics in a stadium full of Korean fans, I think my parents were kind of disappointed about that.”

Park recalled feeling doubts about her switch when she first heard the Olympics would be hosted in Pyeongchang County, Gangwon. She didn’t want to miss her chance to compete in front of the home fans in the sport she grew up with.

“If I got through the qualifying event, I wanted to compete in the relay at least,” Park said. “But I gave it up to focus only on long-track speed skating, but at the time, I was serious.”

Now that Park has concluded her career as a skater, she is hoping to start a new career in fashion.

“I love clothes so much that I always dreamed of designing my own,” Park said. “I’m also sensitive about color, so I have interest in graphic design. For the next year or two, I want to learn about art and fashion and see what I want to do with my career.”

Park hasn’t discarded her passion for speed skating. She’s mulling a commentator role for the Winter Olympics when they are held in Beijing in 2022. If she does, she’ll most likely cover short track rather than long track. “Since I spent more time in short track, when I watch a race, I see a lot,” Park said, “but I don’t see much in long track. If I do get offers, it’ll be short track.”

Park is also entertaining the idea of coaching, but she hasn’t made a final decision or received any offers. “I never thought about it before, but after competing in both sports, I changed my thinking,” she said. “Since I fully understand the difficulties that skaters face, I want to help other female skaters.”