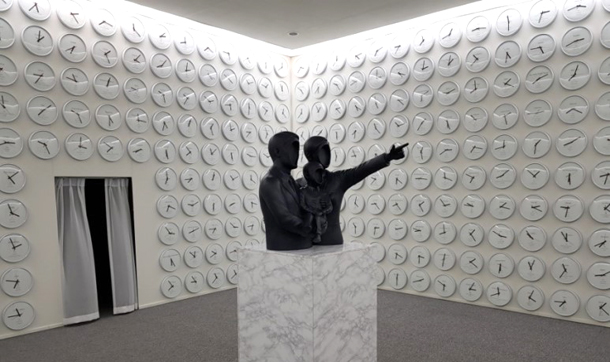 To Sunday
: This exhibition, featuring Korean artists Cody Choi and Lee Wan and curated by Lee Dae-hyung, is similar to one that took place last year at the Korean Pavilion at the 2017 Venice Biennale.

The installation of flashy neon signs by Choi, which covered the Korean Pavilion’s facade and proved popular on Instagram at the biennale, are now installed on the first floor of the Arko Art Center. Other works by Choi, including the hot pink sculpture “The Thinker,” are also displayed.

Lee Wan’s work, including an installation of hundreds of clocks titled “Proper Time,” a piece that wowed visitors at the biennale, is on display the second floor. Lee’s “Mr. K,” which consists of found objects related to Korea’s modern history, has been expanded for this show.

Admission is free. The museum is closed on Mondays. Get off at Hyehwa Station, line No. 4, exit 2.

To May 22: The solo show by sculptor Chung Hyun is an homage to abandoned building materials. Among the works on display are a group of nine huge statues of standing humans, made out of used railroad ties, which are part of the pieces that Chung presented in the garden of the Palais-Royal in Paris in 2016.

Another highlight of the exhibition, which features 30 works, is “Untitled,” which is made of a 7-meter (23-foot) long wooden girder from a 300-year-old hanok (traditional Korean house). The girder, damaged by termites and abandoned, is decorated with faded dancheong, or traditional paint work. “I put some wooden sticks on it as if I were grafting branches,” the artist said. 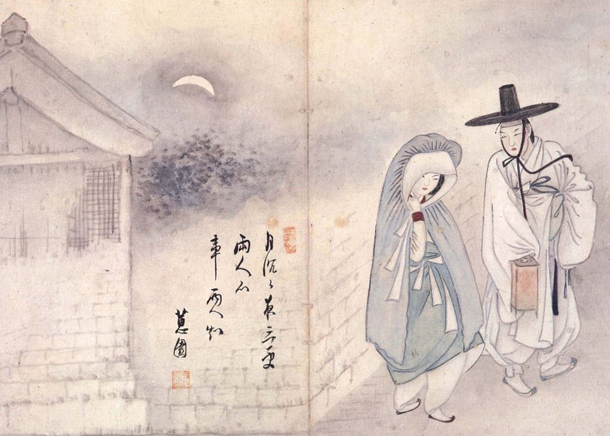 To May 24: At this exhibition, old Korean paintings have been turned into moving images in an attempt to appeal to younger audiences.

Co-organized by the Kansong Art and Culture Foundation and the Seoul Design Foundation, visitors can see not only original paintings by two of Korea’s most influential and pioneering artists - Sin Yun-bok (born 1758) and Jeong Seon (1676-1759) - but also media artworks inspired by the two masters’ works.

To June 5: The solo exhibition of Chun Kwang Young, famous for his work with traditional Korean hanji, or mulberry paper, shows the evolution of his “Aggregation” series, in which numerous triangular pieces, wrapped in hanji torn from old Korean books, are put together to form rugged shapes and cracks such as those found on the surface of a planet.

Pieces in his “Aggregation” series often have rich colors created through traditional Korean dyeing methods. These pieces have names like “Dream” and “Desire.”

To June 17: Arario Gallery opened its second Seoul branch in the newly built RYSE, Autograph Collection hotel in Hongdae in late April. The inaugural exhibition of the gallery, mainly targeting younger artists and more experimental works, intends to set the tone for the gallery. It is a group show that features 25 pieces by seven Asian artists in their mid-30s to early 40s.

Among them, Indonesian artist Uji Handoko Eko Saputro, also known as Hahan, created an installation of painting panels and neon. The work, entitled “Baby Booming,” mixes the iconography of Western religious paintings with comic characters and logos of luxury brands to satirize capitalism in the art market. The exhibit also includes a large painting from Chinese artist Xu Bacheng focusing on gambling addicts, as well as miniature museums he has created to summarize his oeuvre and his views on art history.

Admission is free. The gallery is closed on Mondays. Go to Hongdae Station, line No. 2, exit No.9, and walk five minutes. 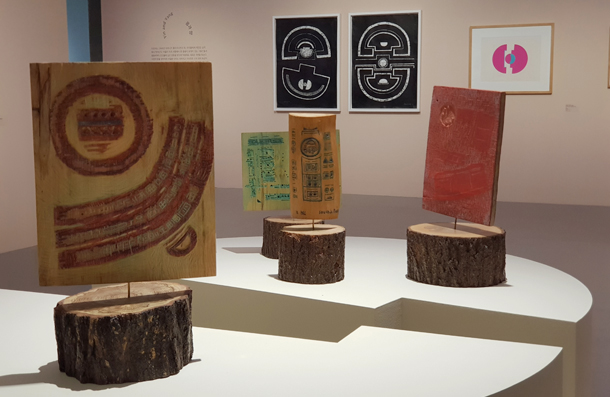 The show features 127 pieces, most of them large oil and acrylic paintings. Among the others are ceramics, woodblock prints and the blocks used to make them, which the artist regarded as separate pieces.

They include the paintings from the early 1960s, categorized by the artist herself as “Woman and the Earth” and a series of geometric abstract paintings the artist called “Yin and Yang”. The last part of the exhibition features Rhee’s cosmic paintings that she called “Road to the Antipodes.”