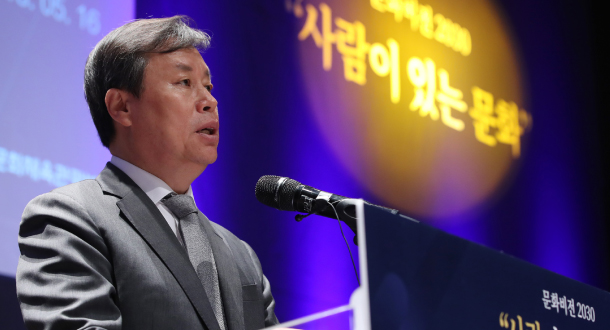 Minister Do Jong-hwan of the Ministry of Culture, Sports and Tourism gives a speech on Wednesday morning at the Museum of Modern and Contemporary Art Seoul in central Seoul about the ministry’s “Culture Vision 2030.” [YONHAP]

The Ministry of Culture, Sports and Tourism announced the “Culture Vision 2030” on Wednesday morning at the Museum of Modern and Contemporary Art Seoul in central Seoul, revealing its plans to change and improve culture policies by the year 2030. The presentation also unveiled a new art policy the ministry plans to pursue by 2022 titled “A life with art, a culture with people.”

Culture Minister Do Jong-hwan began by giving a formal apology for the cultural blacklist formed by the two former conservative presidential administrations, as revealed by the ministry on May 8. “People have the right to not be watched, the right to not be censored and the right to not be discriminated against,” said Do. “But the blacklist scandal left people deeply hurt and scarred, by excluding the creative community from receiving government support and oppressing their freedom of expression. I offer my sincere apologies on behalf of the government.”

The new vision will work to create a society where people can freely express themselves, the specific methods of which are included in the details of Culture Vision 2030 and the new art policies. For the first time, some 8,000 civilians and experts outside of the government were included in the preparation process, creating democratic cooperation between the government and the people. “The process itself was a journey of restoring democracy and the lost trust with the government,” said Do.

The new vision focuses on ensuring the rights of the individuals, promoting the diversity of different communities and expanding social creativity as the three major goals, spanning across a total of nine items of the agenda: expanding individuals’ cultural rights; securing social rights for professionals in the arts and cultural fields; realizing gender equality in Korea; protecting and spreading cultural diversity; forming a cultural ecosystem that’s fair and diverse; realizing a cultural decentralization for all regions; putting together different cultural resources; cooperating with diverse entities; and pursuing a social innovation through cultural creativity. A total of 37 tasks are included under the nine headings.

Details include building a sports center in each region across the country, conducting regular investigations to reveal sexual abuse cases in the arts and cultural fields and cooperating with North Korea to find a common cultural background.

Artist Kang Byung-in puts on a live calligraphy performance at the press conference on Wednesday. The text translates to, “A culture with people, Culture Vision 2030.” [YONHAP]

“We initially began with eight items last year,” said Professor Lee Dong-yeun of Korea National University of Arts, and also the head of the preparation committee. “In the initial vision, we did not have gender equality as a separate item. That was before the recent Me Too movement. We added another item to go forward from the movement.”

Lee Woo-sung, deputy minister of culture and arts policy, gave an explanation of the new art policy. It focuses on four main goals similar to the culture vision, but will focus on the creators and consumers of the arts.

The policy is divided into four goals: giving freedom and autonomy to the art field; respecting the values of art and forming a creative environment; encouraging participation for all; and forming a strategy for a sustainable art field from which a total of 23 tasks stem.

“We believe that culture policies have the power to expand other realms of major social policies,” said Do.

“We will not only strive to ensure the freedom of expression for artists, but also for their social welfare. [The policies] will also work to ensure the rights and social positions of artists and sports professionals through the law. The policies are a realization of our faith that culture can innovate society.”