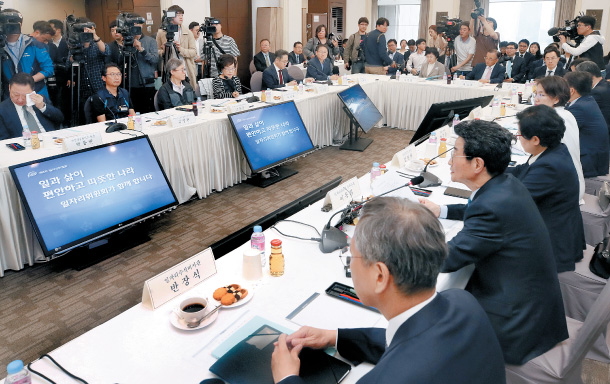 Rhee Mok-hee, vice chairman of the Presidential Committee on Jobs, second from left, speaks at a celebration of the committee’s first anniversary at the Korea Press Center in central Seoul on Wednesdsay. Rhee, former lawmaker and head of the Korea Labor Institute, was appointed to his position by the Blue House a month ago. Representatives from both business and labor unions, including Korea Chamber of Commerce and Industry Chairman Park Yong-maan, attended the event. [YONHAP]

Korea’s job figures disappointed for the third consecutive month with newly created positions stuck in the 100,000 range while the government struggles to pass a supplementary budget dedicated to creating jobs.

For the first time in 11 months, jobs in manufacturing actually shrunk 1.5 percent year-on-year, a loss of 68,000 jobs. Several manufacturing industries are struggling, including autos and shipbuilding.

“As the number of people employed in manufacturing, which has enjoyed continuous growth since last June, shrunk, the level of new jobs has fallen to 100,000 for three consecutive months,” said Bin Hyun-joon of the employment statistics division of Statistics Korea. “We also have to consider the fact that 420,000 were newly hired in April last year, which makes this year’s figure relatively lower.”

Retail and wholesale aren’t doing much better. Jobs in that sector fell 1.6 percent, a loss of 610,000 positions.

Youth unemployment, which has been this government’s particular area of focus, improved slightly compared to the previous month but still remained high.

In March, the unemployment rate for people between the ages of 15 and 29 was 11.6 percent. That figure dropped to 10.7 percent last month.

The Moon administration has been trying to push a 4 trillion won ($3.7 billion) supplementary budget through the National Assembly.

On Tuesday, speaker Chung Sye-kyun asked for a preliminary review to be concluded by 9:30 a.m. Wednesday.

“To deliberate on a supplementary budget bill, the government must explain the need for it before the Assembly. After a speech by the government, relevant committees start looking into the bill,” Jang said. “No extra budget bill has been put to a vote in just three days.”

The ruling Democratic Party lawmaker Hong Young-pyo has again raised the urgency of the bill, stressing that the budget includes measures to help the job crisis in areas like Gunsan, which has lost a lot of jobs with the closing of GM Korea plant.

“The situation of the automotive and shipbuilding industry, which are the center of [Korea’s] manufacturing sector, is very critical and needs swift action,” Hong said.

“We have no more time to postpone the supplementary budget,” he said.