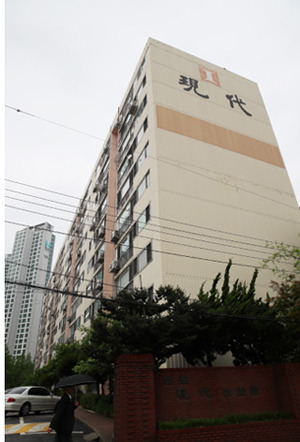 The owners of an apartment complex slated for reconstruction in Seocho District, southern Seoul, are likely to face a much heavier tax burden than they expected, which could make other homeowners reconsider their plans to revamp their complexes.

The Seocho District government estimated that owners of units at the Banpo Hyundai Apartment complex have to pay 135.7 million won ($125,410) per apartment after the reconstruction is completed two to three years from now. That’s 16 times more than what the complex’s homeowners’ association initially estimated.

The homeowners’ association estimated a tax bill of 8.5 million won per household when it submitted approval documents to the Seocho District government on May 2.

The Seocho government turned down the application, saying the association’s estimate for the increase in apartment value was too low.

The association came up with a new tax bill estimate of 71.57 million won per apartment on May 11.

But the Seocho government’s own calculations are nearly double the association’s revised estimate. The local government said it factored in the proposal from the homeowners’ association and also took into account the real estate market in the surrounding area.

“We made our estimate based on the Ministry of Land, Infrastructure and Transport,” said Lee Sang-geun from the Seocho government. “The exact figure can only be decided when the reconstruction is complete, as the apartment value can change.”

At the beginning of this year, a law that taxed reconstructed apartments, which was suspended since 2013, was revived. Under the law, if the value of an apartment complex rises by more than 30 million won per household, owners will have to pay up to 50 percent of the increase in taxes to the local government.

The regulation was first introduced during the Roh Moo-hyun administration in 2006. It was an effort to cool the overheated market that was driving up apartment values at an alarming rate, especially in the Gangnam area of southern Seoul. It was suspended in 2013 by the Park Geun-hye administration in hopes of reviving the real estate market, which started to decline following the global economic crisis of 2008. However, the suspension expired at the end of last year.

The homeowners’ association said that at this point, it has no other choice but to accept the estimate proposed by the local government, as it needs the Seocho government’s approval to push forward with the reconstruction.

“Since it’s only an estimate and not a concrete amount, it’s not too late to recalculate the estimate,” said an association member who requested anonymity.

In January, the Land Ministry estimated that owners of apartments at 15 complexes slated in for reconstruction projects in four affluent districts in southern Seoul - Gangnam, Seocho, Songpa and Gangdong - would have to pay their local governments an average of 440 million won. The reason the estimates for the Banpo Hyundai complex are lower than the ministry’s estimates is because the additions to Banpo Hyundai are relatively small and will add fewer units to the complex than other reconstruction projects.

Industry experts are worried that higher government estimates for homeowner’s tax bills would have a negative impact on reconstruction projects.

According to the real estate information provider Budongsan 114, the value of apartments either in the construction or planning stages of reconstruction fell 0.02 percent on Friday compared to the previous week.