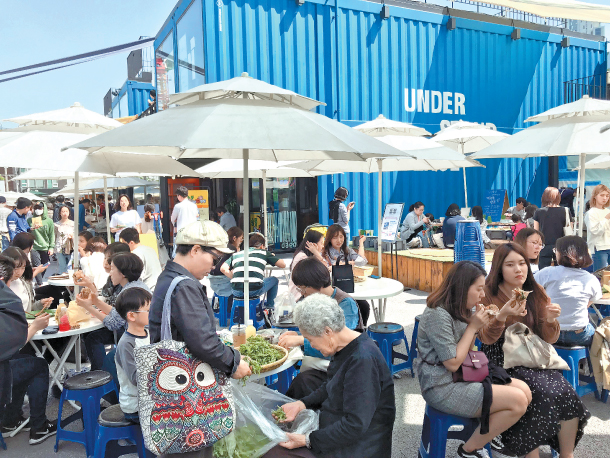 Dozens of visitors savor food while sitting under parasols at the local farmers’ market Marche on a sunny day at the end of April. [JIN MIN-JI]

Consumers who are used to being treated like royalty while shopping won’t have the same experience at Marche.

Vendors at the local farmers’ market take great pride in what they sell, and compromising on price is not an option. Instead of trying to grab the attention of those walking by their booths, most of the vendors let shoppers walk by - which seems to draw customers to return after they have walked through the market.

In its sixth year, Marche takes place twice a month: once in Seongsu-dong, eastern Seoul, and the other in Hyewha-dong, central Seoul. 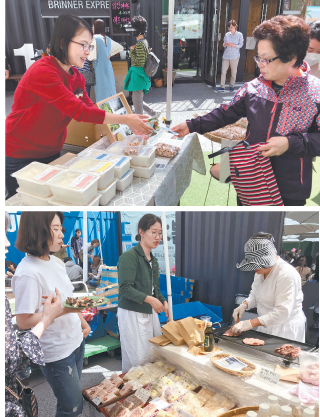 Top: A woman purchases a packet of tofu without asking about the quality of the organic produce. Above: Self-proclaimed rice cake expert Han Gi-seong flips fried pancakes made of sorghum and filled with adzuki beans while her customers wait patiently. [JIN MIN-JI]

Despite the high level of fine dust, the sunny day drew several hundred people to the market in masks and sunglasses, where around 50 vendors were selling a variety of goods ranging from fresh produce to organic meals and carefully-made crafts.

While many Koreans perceive farmers’ markets as a place for health-conscious seniors, walking through Marche reveals that organic foods appeal to a much wider crowd than just those watching what they eat.

On the day I visited, the market was filled with people of all ages and genders. Some parents seemed very enthusiastic about the market, pushing their children in strollers as they walked through the booths. Several visitors were seen with their dogs in tow. 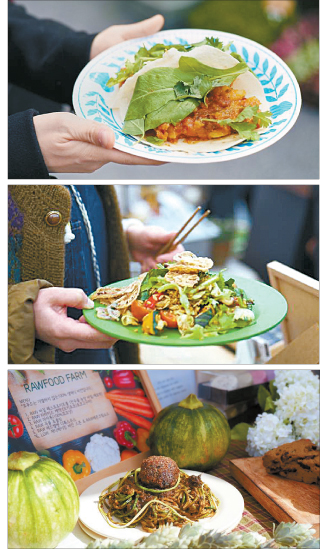 Top to bottom are a salad, veggie wrap and a vegan spaghetti dish made with zucchini. [FARMERS MARKET MARCHE@]

Another surprise at Marche was the vendors’ nonchalant attitudes towards customers, which seemed almost indifferent.

Vendors from Marche neither shout nor forcefully drag customers’ to have a look at their products. Some sellers do offer customers a taste of what they sell, but they won’t give you a look if you don’t purchase the item after trying it out.

I was offered a small cup of cold-pressed blueberry juice by a young couple who grow blueberries and mulberries in Muju, North Jeolla. After emptying the first cup, I turned down a second offer of mulberry juice because I knew I wouldn’t buy it. But I was told with a big smile, “Don’t feel sorry. It’s ok, even if you don’t buy it. Just try and see how it tastes.”

Divided into three sections - farmers, food and crafts - a variety of products were on offer, including meat, vegan pastries, homemade wine and sauces and fresh produce picked that morning.

Some of the most popular items from each section were natural spreads, rice cakes and wooden utensils.

Our Olive, a vendor selling olive spreads, sold out of their entire stock of 80 bottles in just three hours. One stall that sold pancakes and rice cakes, literally translated as Slow Kitchen, was another popular stop. It required visitors to wait at least 15 minutes for a fried pancake made of sorghum with an adzuki bean filling.

Waiting a long time to pay money for something isn’t always the most pleasant experience, but many people at the market were eager to savor a bite of what was on offer, and most of them chose to wait for the fresh treat while watching their brown crispy pancake take shape.

“At first, people asked me what ingredients are used to make these rice cakes and why they were pricier than those sold at regular shops,” said the chef Han Gi-seong while flipping the pancakes using a glass of extra virgin olive oil that was proudly standing in front of the wide heating pan.

“But since I have become a regular vendor at Marche, for almost a year now, frequent customers of the market have started to purchase my rice cakes without questioning the ingredients or the reason for their comparably higher price.”

Some people, of course, complain of the food’s relatively high price. A single pancake costs 4,000 won ($3.73) while the price of the other packed rice cakes, slightly smaller than the size of a standard smartphone, is 3,000 won. You can acquire similar products (but certainly with different ingredients) for less than 2,000 won at a rice cake shop on the street.

In fact, just as Han was explaining her products, a young mother, who came along with her husband, child and sister, was seriously mulling whether to buy one of rice cakes because of the “high price.” She ended up getting one for her child.

While standing near the stall, I heard a young lady passing by with her boyfriend, utter in a disapproving tone, “how can sikhye [a traditional sweet rice beverage] be sweet without any sugar?,” after glancing at the bottles at Han’s stall that read “no sugar.”

The remark clearly offended Han, judging by the look on her face.

But overall, Han says selling food at Marche is “generally less tiring and stressful” thanks to those that respect what she sells.

Other than being recognized for its value, Han, who proudly boasted about her 30-year career selling rice cakes, explained that Marche is an excellent platform for vendors to create a community, through which they share valuable information and help each other out. Han says she purchases the ingredients for her rice cakes from local farmers who also sell at the market.

Although the long line at Han’s stall proves that she makes money at the market, most vendors don’t feel the same about their sales.

According to one farmer, who was selling pre-packages side dishes and plants, “you shouldn’t attend Marche if you are seeking to rake in profits.”

But although she doesn’t make a fortune at the market, she still enjoys attending the biweekly event because she feels “encouraged and supported.”

“There are quite a number of supportive regular customers at Marche. Some of the recognizable ones are chefs, who purchase ingredients from different stalls in the hopes of keeping Marche running.”

The farmer added that the fact that consumers here approve of the prices the farmers set without questioning them also makes her feel “compensated for hard work.”

For vendors who went through a great deal of effort preparing before they come to the market, there is nothing more insulting than having the quality of their products questioned. But that rarely happens in Marche since it’s built on mutual trust between the buyers and sellers.

“When I sell tofu elsewhere, I often get asked whether it’s local produce. But here, people hardly doubt it. They just pick it up, pay and leave,” said Lee Eun-ji, who makes handmade tofu with her parents in Goesan, North Chngcheong. Just as she was saying that, a middle-aged woman accompanied by her grown-up daughter did exactly that: pick up a packet, pay and leave without saying a single word.

Stalls selling crafts were less crowded, which can be explained by smaller number of vendors.

Among the five vendors selling hand-made crafts, such as porcelain, hemp clothing and organic soaps, Nanggru stood out.

The stall sells wooden kitchen utensils like flat plates and handled bread boards made from different types of trees grown on Jeju Island, according to the brand’s representative Yang Seong-pil, who provided the explanation to customers only when asked. Most of the time, he just sat in his chair, leaving customers alone to observe the goods he carefully made.

Aside from offering tempting items, another notable scene at the market was the minimal use of disposable goods.

With the aim to create “a market without trash,” people who purchase a cooked dish either have to bring their own dish, spoon and chopsticks or borrow them for 1,000 won each. Those who bring their own shopping basket can also get a small discount.

In fact, there were many people walking by with a green, reusable plate in hand. They were enjoying dishes while either standing under the sun or sitting down on chairs under parasols, which were set-up at several spots throughout the market.

“Not being able to use disposable items is very inconvenient for vendors. I’m dying to use plastic bags,” said one vendor with a smile while pointing at a glass mug cup she said she was encouraged to use by the market organizer. “Vendors here have to take back even the smallest amount of trash they generate.

“But the thing is, much of the trash generated in Seoul is thrown over to suburban areas, which is where I live. So although it’s a little inconvenient, I think the spirit of minimizing trash is in line with the market’s support of farmers.”