Things are looking up for Korea’s duty-free stores

Things are looking up for Korea’s duty-free stores

Tourists line up in late April at Lotte Department Store in central Seoul to get into the retailer’s duty-free store. [YONHAP] 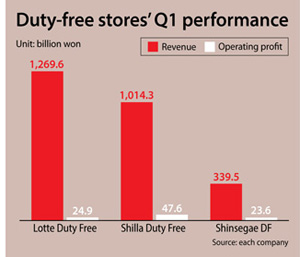 The rising number of Chinese resellers shopping at Korean duty-free stores and the success of overseas branches contributed to the positive results.

Shilla Duty Free announced Wednesday that it has generated 1.01 trillion won ($932.8 million) in revenue, a 30 percent increase year-on-year, with operating profit worth 47.6 billion won, a 182 percent increase from last year. This is a record for the company’s quarterly results.

A big part of the growth came from overseas branches. Shilla currently has five foreign branches including those inside major international airports in Singapore, Hong Kong and Macao.

The Hong Kong branch in particular saw impressive results, almost immediately going into the black after partially opening in December. Between January and March, Shilla’s store in Hong Kong International Airport raked in 94.2 billion won in revenue and 1.1 billion won in net profit. The rest of the branch is scheduled to open in the first half of this year.

“The experience and know-how in operating stores at major airports in Asia helped us to rapidly see profits in Hong Kong,” said a spokesman.

Operating profits, however, were down by 36 percent year-on-year to 24.9 billion won. Despite profits from branches in Seoul hitting 100.5 billion won, the increase in the city was dragged down by operating losses at its airport branches worth 67 billion won, which the company spokesman said was because of costly airport rent.

Like Shilla, the performance of Lotte’s foreign branches gave a positive push to its quarterly earnings. Revenue from six overseas branches increased 52 percent year-on-year. The company is preparing to open more overseas stores this year including in the Nha Trang Airport in Vietnam.

The company saw record quarterly results of 339.5 billion won in revenue, an 85 percent increase year-on-year, and 23.6 billion won in operating profits. Having first launched its duty-free business in 2016, Shinsegae was in the red until the third quarter of last year.

A main factor in its rapid growth was its achievement in attracting luxury brands - a difficult task for young duty-free operators that have less name value, but apparently not for the Shinsegae affiliate.

“We see revenue graphs jump like a staircase every time there’s a new luxury brand in the stores,” said a Shinsegae DF spokesman. “Last year, it was Cartier that joined in August and Louis Vuitton in September that helped to boost sales.”

Local duty-free operators were badly affected as group tours from China were stopped due to a diplomatic row sparked by the installment of the U.S.-led Thaad antimissile system in Korea. The industry previously had a heavy dependence on Chinese consumers which made up 70 percent of the local market’s revenue.

Chinese visitors making purchases to resell in China eventually filled the gap, pushing up local duty-free operators’ combined revenue to reach a record of $1.5 billion in March. But it still remains to be seen when Chinese group tours will start coming back at pre-Thaad levels.

“Korea’s duty-free market will grow 26.8 percent year-on-year to 18.4 trillion won this year,” said analyst Choi Min-ha of Korea Investment & Securities in a report released this month. “The number of Chinese tourists will see a recovery starting in the year’s second half, thanks to improved relations and a base effect from last year - this will fuel the duty-free market’s growth.”