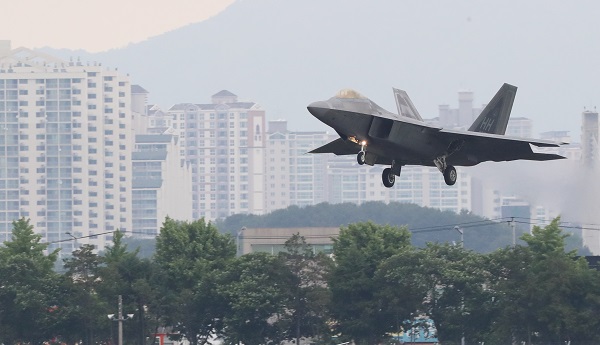 A U.S. F-22 Raptor stealth fighter jet lands on a runway at an air base in Gwangju on Wednesday. North Korea cancelled inter-Korean talks slated for Wednesday in the dead of night, denouncing the Max Thunder joint air force drill. [YONHAP]

Pyongyang threatened to pull out of its planned summit with Washington on Wednesday, saying it had no choice but to "reconsider" the landmark meeting if the United States keeps driving the regime into a "corner" by forcing it to abandon its nuclear arsenal.

A statement issued by North Korea's First Vice Foreign Minister Kim Kye-gwan and published by the regime's official mouthpiece, the Korean Central News Agency (KCNA), came shortly after the North called off a high-level meeting with South Korea just hours before it was to take place in the border village of Panmunjom.

U.S. President Donald Trump is supposed to meet with North Korean leader Kim Jong-un in Singapore on June 12 for what would be the first summit between the two countries.

Kim Kye-gwan took issue with officials in the Trump administration insisting on complete, verifiable and irreversible denuclearization, referred to as CVID, and also demolish all its missiles and biological and chemical weapons.

The vice foreign minister also denounced the Trump White House for saying it would offer rewards to Pyongyang only after it scraps its nuclear stockpile, stressing that the North has never depended on the U.S. for economic development and will not to do so in the future.
Kim said it was "absolutely absurd" for the U.S. to "dare compare" North Korea, a complete nuclear state, with Libya, a country that was in an early stage of nuclear development when it agreed to abandon its program in return for sanctions relief in 2003. The diplomat urged Washington to end its hostile policy toward North Korea in order for it to agree to denuclearize the Korean Peninsula.

"If the U.S. is trying to drive us into a corner to force our unilateral nuclear abandonment," Kim was quoted as saying in an English version of the KCNA report, "we will no longer be interested in such dialogue and cannot but reconsider our proceeding" to the North-U.S. summit.
Earlier on Wednesday, the North informed Seoul at 12:30 a.m. that it would "indefinitely suspend" a high-level meeting that was to take place at 10 a.m., blaming Seoul's ongoing air force drill with Washington, which it described as an "undisguised challenge" to the inter-Korean declaration signed at the South-North summit last month.

The high-level meeting was to take place at Peace House, a South Korean-controlled building in Panmunjom, where a summit between the two countries’ leaders was held on April 27. The South's Unification Ministry, which handles relations with the North, said the high-level talks were intended to discuss ways to implement agreements made in the Panmunjom Declaration that came from that summit.

In a separate KCNA report on Wednesday, the North criticized South Korea's Max Thunder air force training exercise with the United States as a "bid to make a preemptive air strike" on the regime and "win the air."

The joint drill, which kicked off last Friday, is scheduled to end on May 25. The two-week exercise has been held annually since 2009.
"The U.S. will have to think twice about the fate of the DPRK-U.S. summit," said KCNA, referring to the North by the acronym of its official name, the Democratic People's Republic of Korea.

"We will closely watch the ensuing behavior" of Seoul and Washington, the report continued, adding that the South Korean government should be held "wholly accountable" for the "difficulties and obstacles in the way of the north-south relations."

At one point, the North slammed Seoul for allowing "human scum to brazenly hurl mud at the dignity of the supreme leadership of the DPRK and its system" and "play down" the Panmunjom Declaration at the National Assembly. The regime did not specify who the expletive was aimed at, but it often refers to North Korean defectors. Government officials believe Thae Yong-ho, Pyongyang's former deputy ambassador to the United Kingdom, who defected to South Korea in 2016, was the target.

Thae held a press conference on Monday at the National Assembly in Yeouido, western Seoul, to mark the release of his first book, a 544-page autobiography with a Korean title that roughly translates as "The Secret Code of the Three-Story Secretariat Office: Thae Yong-ho's Testimony."

During the press briefing, Thae said Pyongyang will never give up its nuclear weapons and will downsize its stockpile at the most because CVID would require unlimited inspections by international agencies. Allowing them would be a critical blow to the core foundation of North Korea's power structure, which revolves around its supreme leader, Kim Jong-un.

The Unification Ministry said in a statement Wednesday morning that it was "regrettable" Pyongyang canceled the high-level meeting, saying the action was "inconsistent" with the fundamental spirit and purpose of the Panmunjom Declaration.

The South Korean government has a "firm will" to faithfully carry out the declaration, said the ministry's spokesman, Baik tae-hyun, who urged the North to immediately respond to inter-Korean talks.

The ministry said it issued a statement to North Korea on Wednesday afternoon that was "similar" to the spokesman's announcement.
Heather Nauert, spokeswoman of the U.S. State Department, said Tuesday during a press briefing in Washington that the government will continue to plan the meeting between Kim and Trump, adding that the joint air drill with Seoul was "certainly not provocative" and something that's been held for decades with many allies around the world.

South Korea's Foreign Affairs Ministry said its minister Kang Kyung-wha had a telephone conversation with Trump's secretary of state Mike Pompeo on Wednesday morning at the latter's request to talk about the high-level meeting's delay.

Pompeo told Kang that the U.S. will continue to prepare for the summit with North Korea while "keeping the North Korean action in mind," the ministry said.