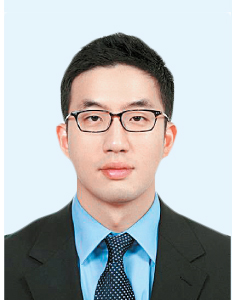 The heir to the LG Group throne has begun his ascension, as bedridden Chairman Koo Bon-moo’s adopted son Koo Kwang-mo has been named to the company’s board of directors.

According to the group’s holding company LG Corp. on Thursday, its board of directors named Koo Kwang-mo, 40, a senior executive at LG Electronics and Koo Bon-moo’s only son, as internal director for the company, as the chairman has limited ability to govern the company due to illness.

LG confirmed that its 73-year-old chairman is hospitalized in Seoul due to severe health conditions, but declined to elaborate on his illness. According to industry sources, Koo had two surgeries last year, and his health recently deteriorated.

His son’s promotion is subject to shareholders’ approval at a scheduled meeting on June 29. If it is approved, LG’s transfer of power to the next generation of the Koo family is expected to speed up. LG said in statement that it named Koo Kwang-mo a board member in preparation for a potential succession race.

The family said that the adoption was done to carry on the family’s leadership according to Confucian tradition, in which first sons take over family affairs.

Koo Kwang-mo, who keeps a low profile, is currently the head of LG Electronics’ information display unit. The business unit focuses on large digital displays, like electronic signage. He started his career at LG in 2006 as an assistant finance manager at the electronics arm and climbed up the corporate ladder step by step, according to LG, despite being a member of the owner family.

LG said the junior Koo went through “enough managerial training” through his experience in various roles at LG Corp. and LG Electronics. The company described his personality as “easygoing,” saying that he respects his colleagues and sometimes watches baseball games with them. As far as work goes, LG said that Koo is a man of action.