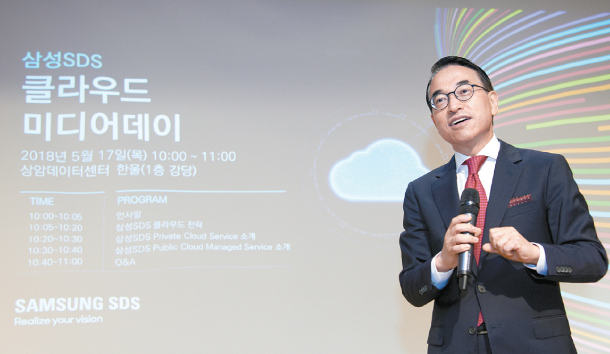 Samsung SDS plans to find customers that aren’t other Samsung affiliates in a bold move to bolster its cloud business, the company said Thursday at a press briefing held at its data center in Sangam-dong, western Seoul.

The IT service company’s cloud business used to be focused on moving the data servers of Samsung affiliates like Samsung Electronics and Samsung C&T to the cloud.

“Korean companies are relatively late to the cloud compared to global enterprises in developed countries,” said Hong Won-pyo, chief executive of Samsung SDS, at the briefing. “This also means the market offers a great opportunity for us, and a lot of foreign cloud service providers are also tackling the Korean market for its potential.”

According to Hong, the company’s cloud business grew 130 percent on-year in the first quarter of this year. He believes steeper growth will be possible in the coming years, as the public, financial, manufacturing and service sectors consider moving their data centers to cloud-based systems.

The strategy of the Samsung unit is to exploit its cloud business experience with Samsung affiliates and to offer an end-to-end solution for enterprises that have difficulty choosing servers.

SDS said it will create an optimal mix of cloud services from its own private cloud offerings and services sourced from its global partners Amazon, Microsoft, Google, Alibaba and Oracle. These services will be based on enterprises’ needs and will help them effectively manage the mix of different cloud platforms, the company said.

Private cloud services offer exclusive access to a single organization, which affords it greater control and privacy. Managing data through a cloud service on an open platform allows users to access data through the internet.

Samsung SDS currently offers a number of private cloud options, including a standard edition cloud that the company claims has downtime of less than an hour per year.

As it hopes to more aggressively target non-Samsung clients later this year, SDS plans to introduce a mission critical cloud service starting in July that will reduce downtime to roughly five minutes a year.

The company’s supercomputing cloud that can handle high-performance computing services, such as chip designs, autonomous driving and virtual reality content production, will be released in November.