White House pulls back from Libya model for North Korea

White House pulls back from Libya model for North Korea 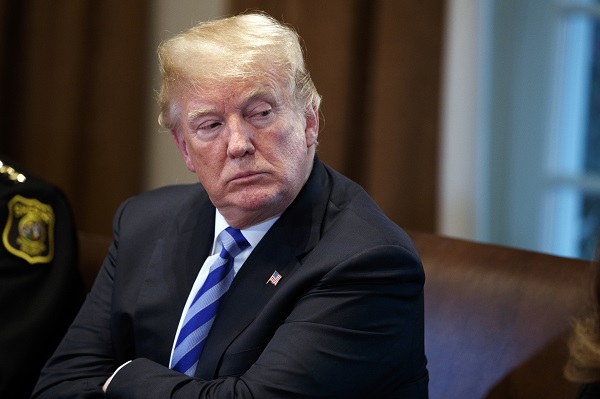 President Donald Trump listens during a roundtable on immigration policy in California, in the Cabinet Room of the White House, Wednesday, in Washington. [AP]

The White House on Wednesday indicated the Libya model advocated by its national security adviser John Bolton was not applicable to denuclearizing North Korea, apparently reacting to North Korea’s threat to pull out of a summit scheduled for next month.

Asked if the Libya model was the denuclearization framework it was pursuing, White House spokeswoman Sarah Sanders walked back comments by Bolton last month, saying she hadn’t “seen that as part of any discussions.”

“I am not aware that that’s a model [Libya] that we are using,” she said. "I know that that comment was made,” she continued, referring to Bolton’s remark on “Face the Nation” that Washington was looking at the Libya model to be applied to North Kore, “There’s not a cookie-cutter model on how this would work.”

Sander’s comment Tuesday appeared aimed at easing uncertainty over whether the summit meeting between North Korean leader Kim Jong-un and U.S. President Donald would take place on June 12 in Singapore.

On the prospect of holding the first North Korea-U.S. summit meeting as planned, Trump said Wednesday, “We will have to see,” a non-committal response. "We haven't seen anything, we haven't heard anything. We will see what happens," he continued.

North Korea had yet to respond as of press time Thursday to the White House’s pulling away from the Libya model.

On Wednesday, North Korea warned it was reconsidering the highly anticipated meeting, taking issue with the hawkish Bolton in particular,for his remarks about the Libya model adopted in 2003.

Bolton is known for a hardline stance on the North and advocacy for the Libya model, in which complete, verifiable, irreversible dismantlement of a nuclear arsenal precedes sanctions relief and economic aid.

Bolton said last month on CBS’s “Face the Nation” that Washington was “looking at the Libya model of 2003, 2004,” a comment that apparently irritated Pyongyang, which views Libya’s nuclear disarmament as the direct cause of downfall of Colonel Qaddafi and his death at the hands of Western-backed rebels in 2011, eight years after the denuclearization deal was signed.

The downfall and death of Qaddafi is usually argued as a reason the Kim Jong-un regime should hold unto nuclear arsenal to guarantee its security from external forces.

Bolton also asserted last weekend that the North must rid itself of uranium enrichment and plutonium reprocessing capabilities, ballistic missiles and chemical and biological weapons as well as ship its dismantled nuclear weapons to an American nuclear research facility in Oak Ridge, Tennessee, a position that could have also rattled the North.

Annoyance was evident in a statement issued by the North Wednesday, in which Kim Kye-gwan, its first vice foreign minister, said it was “absolutely absurd” for the U.S. to “dare compare” North Korea, a complete nuclear state, with Libya, a country that was in an early stage of nuclear development when it agreed to abandon its program in return for sanctions relief in 2003.

Kim said the North could “reconsider our proceeding” to the June 12 summit if the U.S. “is trying to drive us into a corner to force our unilateral nuclear abandonment.”

Bolton has long been a skeptic of the North’s intention to denuclearize and asserted that the North would only lure the U.S. to the negotiating table to gain concessions first and renege on any denuclearization deal later.

Pyongyang has not been shy about showing its animus toward Bolton, saying it was aware of his past remarks, with Kim saying Wednesday, “We do not hide our feelings of repugnance toward him.”

On the North’s calling him out, Bolton said it was “nothing new” in a Fox radio interview Wednesday, recalling he had been called “human scum” and “bloodsucker” by North Korea in the past, noting that’s “what the North Koreans do.” He said the question was whether the North Koreans were “taking our objective of denuclearization seriously.”

Bolton emphasized that if the North failed to show a true commitment to denuclearization, the Trump White House would not “make the mistakes of past administrations and fall into endless discussions with North Korea while they ask for more and more benefits,” alluding to the possibility of Trump abruptly walking out of the summit if his denuclearization demands are not met.

Meanwhile, Blue House officials scrambled to assess the situation and seek ways to resolve unexpected hurdles. Chung Eui-yong, head of the Blue House’s National Security Office, presided over a National Security Council meeting Thursday morning during which the participants agreed to continue consulting with the North to reschedule a high-level meeting that was abruptly called off by the North the day before in protest of a joint military drill.

Chung also talked to Bolton, his U.S. counterpart, on the phone to discuss the North’s threat of a pull-out.

The Blue House said it would coordinate with Pyongyang and Washington through “various channels” for a successful North-U.S. summit in the “spirit of mutual respect.”

“There seems to be a gap in positions of the two in the run-up to the summit meeting. We put in the term ‘mutual respect’ to stress the importance of having an attitude that tries to solve the issue from the perspective of the other,” said the official speaking on the condition of anonymity.

President Moon Jae-in is expected to convey to Trump what the North wants in return for giving its nuclear and long-range missile programs while also taking note of how far Washington is willing to go in compensation should Pyongyang carry out complete denuclearization during his meeting with Trump next Tuesday at the White House.