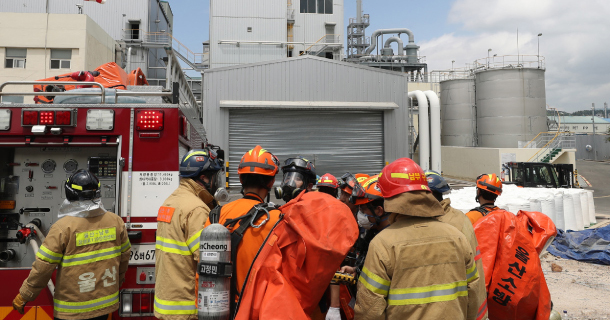 Firefighters stand by near a Hanwha Chemical factory in Ulsan to neutralize chlorine gas leaked from the factory Thursday morning. [YONHAP]

Chlorine gas leaked at a chemical factory in southeastern Korea on Thursday, sending 13 people to hospitals with difficulty breathing and other symptoms, but none of them were in serious condition.

The accident happened at a Hanwha Chemical factory in Ulsan around 10 a.m., affecting six workers around the scene and seven others outside the factory. All of them went to hospitals either by ambulance or driving themselves with difficulty breathing, nausea, a runny nose and other symptoms.

None of them, however, were in serious condition, officials said.

Affected workers complained that their eyes stung so much from the leak that they could barely open them and that the bad smell from the leak was strong. No casualties were reported among ordinary citizens as the factory wasn’t near residential areas. A decontamination squad was sent to neutralize the scene.

Police are looking into what caused the leak, with the initial suspicion being that the leak happened in the course of moving chlorine gas from a tanker truck to a storage tank, officials said.