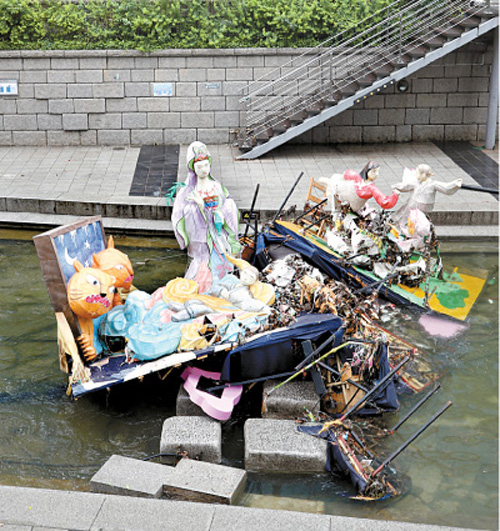 Lantern displays for Buddha’s Birthday festivities sit next to trash in the Cheonggyecheon, a stream in central Seoul, on Wednesday. Floodwater dislodged the displays and sent them floating down the stream. [YONHAP]

In Seoul, around 30 millimeters (1.2 inches) of rain fell in just one hour on Wednesday afternoon. Drizzles persisted through the rest of the unusually humid day. By evening, 45 millimeters had fallen in the city of Seoul, according to the Korea Meteorological Administration.

The rain continued into Thursday morning at rates of 20 to 30 millimeters per hour, accompanied by thunder and lightning. The humidity level was higher than the previous day.

Residents of Seoul’s northern suburbs slogged through long evening and morning commutes after lightning cut power to a number of rail lines on Wednesday. Parts of the Gyeongui-Jungang Line were suspended between noon on Wednesday and 8 a.m. on Thursday. Buses served the train line instead.

A man riding his bicycle near a stream in Seongbuk District, northern Seoul, was reported missing at around noon on Wednesday. His body was found in the stream three hours later. The Seongbuk Fire Department believes he might have drowned after rising water swept him away.

In Yongin, Gyeonggi, a resident reported seeing a drunken man get swept away by water under the Geumhak Bridge after he fell asleep on Wednesday. Rescue workers found his body on Thursday.

Southern Gyeonggi was most affected by the rain, with flooding being reported in the cities of Osan, Icheon, Hwaseong and Yongin.

In Seoul, lantern displays installed on the Cheonggyecheon, a stream in central Seoul, to celebrate Buddha’s Birthday next Tuesday were swept away by floodwater and found floating with other trash in various parts of the stream.

Korea usually sees rainfall of this magnitude during the humid summer months of June and July, when the moist Pacific air meets cooler air from the continent. The unusually strong spring showers this week were the result of warm air from southern China meeting cold air from the north.

The Korea Meteorological Administration expects up to 20 millimeters of additional rainfall in Seoul and Gyeonggi on Friday morning.