Tours resume from China on a shoestring

Tours resume from China on a shoestring 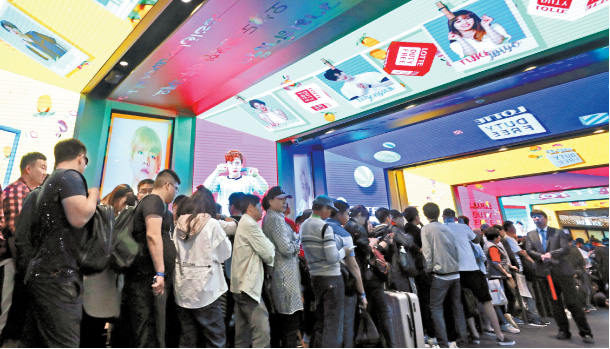 Chinese tourists line up awaiting the opening of the Lotte Duty Free store in Myeongdong, central Seoul, on Thursday. [NEWS1]

A thaw in relations between Seoul and Beijing has reinvigorated the Korean travel industry - and raised new concerns over the quality of tours being offered to Chinese tourists.

After the Chinese National Tourism Administration lifted the group tour ban for people living in the city of Chongqing and Hubei province on May 3, cut-rate packages to Korea are being offered on Chinese travel agency websites, with some costing as low as 288 yuan (around 49,000 won or $50) for a four-day trip. This includes food and lodging, transportation within Korea, traveler’s insurance and visa costs, all at a price less than a fourth of the round trip ship fare from Tianjin to Incheon, which must be bought separately.

The Chinese government imposed a number of unofficial sanctions on South Korea, including a ban on group tours to Korea, in retaliation for Seoul’s decision in 2016 to deploy the U.S. Terminal High Altitude Area Defense (Thaad) missile defense system on its territory. Relations between the two countries improved after Moon Jae-in, who originally held reservations about the deployment of the American missile shield batteries as an opposition leader, was elected to the presidency and went to Beijing on a state visit in December 2017.

While a nationwide restriction remains in place in China, a partial relaxation of the ban has breathed life into the struggling tourism industry in Korea. Chinese tourists made up nearly 45 percent of all foreigners visiting Korea before the ban took effect in early 2016.

When this well of Chinese visitors dried up, so did the profits of Korean travel agencies and retailers reliant on Chinese consumption of popular Korean products like cosmetics and luxury goods. This forced them to modify their business model to stay profitable. They became reliant on so-called shuttle traders, known as daigou in Chinese, who replaced regular tourists as the largest segment of foreign shoppers in Korea. The daigou, often seen sporting a number of large, packed travel carriers, buy goods in bulk to resell them back in China, where demand for Korean goods soared after the ban. Spending by these traders was instrumental in keeping Korea’s duty-free industry afloat during the travel ban years, but also had the effect of distorting tourist itineraries in Korea and focusing them on shopping.

Sightseeing and food and lodging became less important components of group tours when the tourists were most interested in shopping at duty-free stores. Thus low-cost tour packages became a norm. The drop in quality of the tours has been cited as one of the reasons foreign tourists coming to Korea rarely make a second visit.

All this was made possible by coordination among Chinese travel agencies and their Korean counterparts as well as retailers, especially duty-free stores. Travel agencies in China sell packages at cheap prices online since they are only responsible for gathering their clientele and sending them to Korea. From there, Korean travel agencies provide the actual tour service, often taking visitors to places like Gyeongbok Palace, Mount Namsan and the Blue House, which don’t charge admission. The most important stops are to duty-free stores and other retailers, which pay commissions to travel agencies for bringing customers their way. These commissions account for around 15 to 20 percent of all revenue from tours and in some cases reach 50 percent.

According to the Korea Customs Service, the sum of commissions paid to travel agencies by duty-free stores in Seoul last year reached a record 1.15 trillion won, equivalent to just over a billion dollars, having quadrupled in just four years. Chinese travel agencies are then reimbursed by their Korean partners with an added commission, and are paid extra to keep suggesting Korea as a destination to clients - a malpractice known by industry insiders as the “poll tax.” Before the ban in 2016, the usual rate for poll taxes were 500 to 800 yuan ($75 to $121) per customer. Low-cost package tours has been labeled “dumping tourism,” which some experts like Oh Ik-geun, professor of tourism management at Keimyung University, say is toxic to the long-term future of Korea’s tourism industry. “If these low-cost tours and the practice of the poll-tax continue, Korea will never be able to get rid of its image as a trash travel destination,” Oh said.

Another problem is the additional subsidies and incentives provided to travel agencies by the Korean government as a way to boost tourist numbers. The Korean Tourism Organization, a government-run company under the Ministry of Culture, Health and Tourism, hosted a banquet for representatives of a number of Chinese travel agencies in which they introduced a new subsidy policy to attract group tours. If Chinese agencies could send in groups of 3,000 tourists by ship to Korea, the KTO offered to pay 30,000 won per customer.

The level of incentives vary according to a new ranking system for travel packages devised by tourism officials, ranging from S - the highest level - followed by A, B, C and D. The criteria for these rankings have not yet been made public. These financial incentives, while having the intended effect of increasing tourist numbers, have added to the decline in tourism quality. Nonetheless, an increase of 11.8 percent in the number of Chinese tourists since March 2017 has been enough to convince the government’s tourism officials that their subsidy policies have been effective.

Experts, however, have not been won over. Hanyang University professor of tourism Lee Yeon-taek criticizes both the central and local governments as well as tour companies for focusing too much on quantity over quality.

“The private sector needs to develop more attractive travel products while the government must pursue urban and infrastructure development with tourism in mind,” he suggested. “Only then can our tourism industry truly take the next leap forward.”