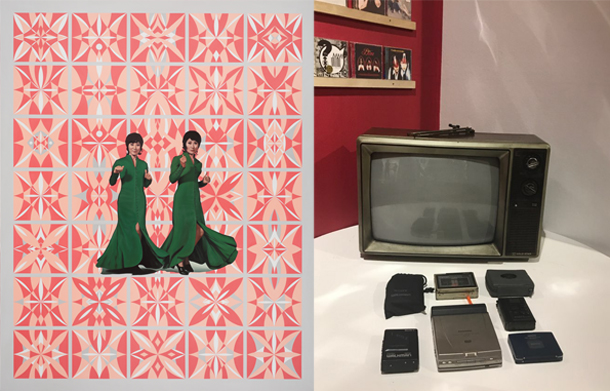 Artwork, left, by Hong Kyoung-tack featuring the Pearl Sisters, an iconic girl group from the 1970s, hangs by the entrance of the exhibit. Collections of cassette tapes, TVs and other objects, right, offer visitors a look at media from the past. [LOTTE GALLERY, LEE jEONG-HYUN]

Many people cite S.E.S. and Fin.K.L., two pop acts who were popular in the 1990s, as the progenitors of modern-day girl groups. Most Koreans alive at the time of the groups’ dominance are familiar with their music and choreography to this day, so it seems plausible that those two groups must have started the local phenomenon.

However, this belief turns out to be false, according to writer Choi Kyu-sung’s new book, “Ancestors of Girl Groups.” This book encompasses six years of Choi’s research on 305 girl groups covered in the media for their songs and performances from the 1930s to the 2000s.

According to Choi, the nation’s first girl group was the Jeogori (referring to the upper garment of traditional Korean clothing) Sisters, who debuted in 1935. Unlike the big-name girl groups from the ’90s, sadly many of the earlier acts have been forgotten.

To show off his research and promote his book, Choi launched an exhibition titled “Ancestors of Girl Groups,” which kicked off on May 2 at the Lotte Gallery Yeongdeungpo Avenuel in western Seoul. The exhibition, which runs until May 27, also features two pieces by noted pop artist Hong Kyoung-tack. This marks the second collaboration between Choi and Hong, who worked together on a similar exhibition last month. The space is filled with not only black-and-white pictures of girl groups but also momentos from the past, such as old cassette tapes and albums.

Near the entrance, there is a large portrait of the Pearl Sisters, a legendary female duo that debuted in 1968. According to Jung Go-eun, a curator at Lotte Gallery, “Hong chose to draw these two because they best represent the talented, sophisticated image of girl groups. Because of its artistic significance, it is currently being sold for 50 million won ($46,312).”

“Ancestors of Girl Groups,” which runs to May 27, features artwork and memorabilia of girl groups that were active between the 1930s and the 2000s. [LOTTE GALLERY ]

Starting with the 1930s and ending with the 2000s, albums and records from each period are displayed on the wall. In the middle of the exhibition hall, there are CDs and posters of girl groups that have released hits in the past few years such as AOA and Apink. “Because everything was written in the book, I intentionally left out descriptions of the works in the gallery,” Choi said at a press preview on May 12.

But still, there are brief descriptions of each decade on the wall. For example, during the 1970s, which the author relates to the most, there was a trend of twin duos, such as the Hit Girls and Seoul Kittens.

The current CEO of the Korea Pop Research Institute, Choi has had a great deal of passion for pop culture since he was an elementary school student. “I’ve always been a fan of [girl groups] and enjoyed listening to music as a child,” said Choi during an interview with the Korea JoongAng Daily at the gallery’s opening ceremony.

According to Choi, his first exhibition presenting his research on girl groups was held in 2012, when 16 of the top 20 songs on the pop music chart were sung by groups such as Wonder Girls and Girls’ Generation. Before then, no matter how hard and talented girl groups were, they were typically overshadowed by boy bands.

Around this time, he received an offer from curator Kim Yong-jin from the Bupyeong Arts Center to host an exhibition on a fusion of contemporary music and modern art. He took the offer into consideration and opened an exhibition that looked at the influence of 150 girl groups. “It would have been better if I published a book back then, but my research was incomplete,” said Choi.

He also added that he “has the habit of collecting [valuable] objects, especially anything related to music.”

Indeed, this habit proved to be very useful when it came to collecting disco albums, cassettes, stage costumes, trophies and pictures to present at the exhibition.

“Collecting the objects, such as the trophy, which came from the United States, took a long time,” said Choi.

It might seem strange that such a passionate researcher would not include contemporary girl groups that top today’s charts, such as YG Entertainment’s Blackpink and JYP Entertainment’s Twice, but Choi notes that he does not focus on the modern era of pop groups. He emphasizes that “the main purpose of this book is to give insight to the different styles in fashion, performance and music of the girl groups that performed from the 1930s to the 2000s.

Along with the many misunderstandings people have about girl groups, Choi says that before 2012, many people assumed that girl groups were unsophisticated, dull and innocent.

“The biggest difference between the girl groups from the past compared to those of the present is the presence of major music label-entertainment agencies that push for the group’s success.”

To go to Lotte Gallery Yeongdeungpo Avenuel, get off at Yeongdeungpo station, line No. 1, exit 5 and walk for 2 minutes. Admission is free. The gallery, located on the 10th floor of Lotte Department Store in Yeongdeungpo District, western Seoul, is open during the department store’s hours, 10:30 a.m. to 8 p.m. For more information, call (02) 2670-8889.