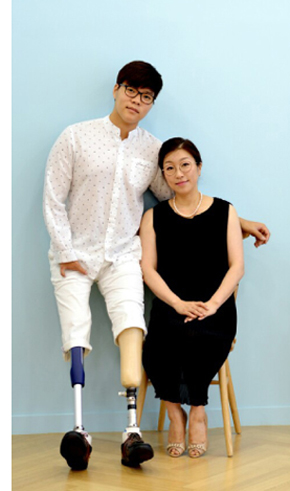 Every year, the Ministry of Health and Welfare awards medals of merit to Koreans who have contributed to the country’s culture and social fabric. On May 12, when the ministry held its annual ceremony, one recipient, Yang Jeong-sook, was nowhere to be seen.

Instead, her adopted son Kim Se-jin, a para swimmer, accepted the medal on his mother’s behalf.

“There are many adoptees who live happier than Se-jin but just aren’t well known,” Yang said when asked why she chose not to attend the ceremony. “It is they who deserve the award.”

The Korean Adoption Services, an agency under the Ministry of Health and Welfare, recognized Yang for being an “outstanding mother” and adding to the “positive image” of adoption. Her adopted son, Kim, is a three-time medalist at the World Para Swimming Championships. A birth defect left him without his lower-right leg and left foot, and his right hand only has two fingers.

In 1998, Yang adopted Kim after meeting him at an orphanage. He was 1 year old at the time.

“It’s not that I raised him well,” Yang said, “but that my son and daughter — our whole family — just got along well. If I can share the award with kids like Se-jin in the future, I would even spread it across the sky.”

Because of Kim’s achievements in swimming, Yang is better known as the mother of a para-athlete than the mother of an adoptee. The stigma in Korea surrounding adoption of children with impairments made Yang cautious about discussing it. In the first few years after adopting Kim, she would introduce herself as his birth mother rather than adopted mother. Some of her acquaintances even chastised her for “not thinking straight.”

“My child is the prettiest in my eyes,” Yang said, “but others have called him disgusting, which makes me feel so angry and so sorry for him.”

Even after 20 years of raising him, Yang said people still make judgements. “It hasn’t gotten any better,” she said. “The only thing that may have changed is that people don’t say it straight to my face. Maybe it’s because people are less interested in others’ business now.”

For parents considering adoption, Yang warned them not to romanticize the experience. “It’s best not to let their fantasies get the best of them,” the mother said.

Adoption should be a choice of last resort, Yang said, because there’s risk of the relationship falling apart and pain in nurturing a child with the scar of knowing he or she was adopted.

“Even if you can’t pass your genes down to them, you have to help them carry out their life,” Yang said. “You have to keep in mind that there will also be hard times and make sure you can endure them before you decide to adopt.”

On the weekends, Yang hosts children in foster care. “We’re one big family,” she said.

The number of adopted children in Korea has been going down since 2012, from 1,125 to 265, according to the ministry’s latest census figures from 2016.

“There are so many kids waiting to be adopted when you visit an orphanage,” Yang said. “They need mothers. I hope others will look upon adoptees favorably as they do when they hear they are pregnant at the hospital.”