Kim told Pompeo he is willing to accept U.S. troop presence for now

Kim told Pompeo he is willing to accept U.S. troop presence for now 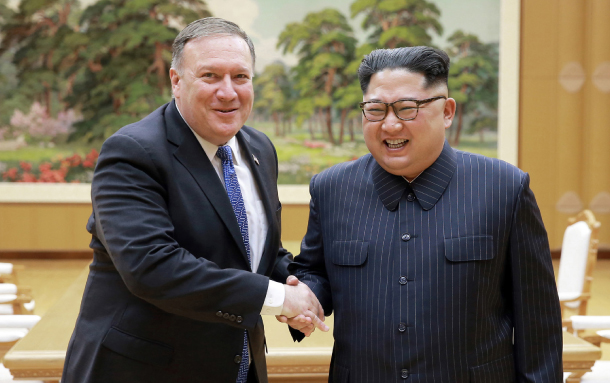 A smiling Kim Jong-un shakes hands with Mike Pompeo, the U.S. Secretary of State, during the latter’s second visit to Pyongyang on May 10. [YONHAP]

North Korean leader Kim Jong-un told U.S. State Secretary Mike Pompeo during their meeting earlier this month that he was willing to accept the U.S. military’s current presence in South Korea but expects that presence to be reduced in the future, a source with knowledge of the meeting told the JoongAng Ilbo on Wednesday.

The source said Kim broached the subject of the U.S. Forces Korea during meeting with Pompeo. “We are concerned with the training exercises and arms deployment by U.S. forces,” Kim said, according to the source, “but because of the domestic situation in South Korea and its alliance with the United States, though we aren’t ready to tolerate the situation, we are willing to leave it as it is for now.”

However, if peace is maintained on the Korean Peninsula and “no problems occur,” the United States should “demonstrate its sincerity,” Kim said, according to the source. “If I act,” he continued, “I hope that the United States reciprocates with sincerity through measures such as a size reduction or the removal of strategic arms.”

The source said it was not clear whether Kim was referring to a reduction of joint military exercises or troop levels when he brought up “size reduction,” but it appeared he was speaking in a broad sense about the United States’ military presence.

This suggests that Kim will not likely bring up the withdrawal or reduction of American troops on the peninsula during his meeting with U.S. President Donald Trump set for June 12.

However, the issue could arise in later negotiations of a peace treaty to formally end the 1950-53 Korean War, which technically concluded with a cease-fire.

Kim’s words “if I act” may refer to his willingness to surrender his nuclear weapons with the expectation that the United States reciprocate by reducing troop levels in South Korea.

The revelation of Kim’s view on the U.S. Forces Korea suggests the North might not be as displeased with recent military exercises as it publicly claims.

This week, the North canceled a high-level meeting with the South and threatened to pull out of the summit with Trump over a joint air force drill between South Korea and the United States. The drill, known as Max Thunder, began on May 11 and is scheduled to end next Friday.

The two countries have been regularly holding the drill in the first half of each year since 2009, and Pyongyang’s criticism toward them have been perfunctory at best, with the exception of 2014, when the drill was called an “evil scheme to attack the North.”

The North’s state media has not been as attentive to the details of Max Thunder, with the Korean Central News Agency falsely reporting that “around 100 airplanes including B-52 strategic bombers and F-22 stealth fighter jets were deployed” for the exercise, when in fact no B-52s were included.

Based on Kim’s own words about the U.S. Forces Korea, the drills do not appear to be the main reason for canceling a meeting with the South and threatening to walk out of the summit with Trump. A better explanation might be that Pyongyang is trying to gain an upper hand over Washington ahead of the summit.

“North Korea is concerned and dissatisfied that the United States will not provide any concessions given the lack of a compensatory response to Pyongyang’s pre-emptive measures on its nuclear capacity,” said the source, who is well-acquainted with the inner workings of the White House. “While it may have appeared that negotiations between the two parties were proceeding smoothly, internally there was heavy pushing on Washington’s part.”

The source cited Pompeo’s first visit to Pyongyang on April 1, when he was director of the Central Intelligence Agency, as an example. “North Korea wanted Pompeo to visit around April 4,” he said, “since musicians from South Korea were performing in Pyongyang that day. But the Americans did not yield to the schedule and eventually got their way.”

Kim’s request for a reduction of U.S. military presence on the peninsula rather than complete withdrawal may be part of its strategy to strike a peace treaty. The calculation is that once a peace treaty is in place, discussions of withdrawal will naturally follow without North Korea having to bring it up.

Such a scenario has been floated before. In an op-ed in the magazine Foreign Affairs on April 30, Moon Chung-in, a special adviser to South Korean President Moon Jae-in on inter-Korean affairs, wrote, “What will happen to U.S. forces in South Korea if a peace treaty is signed? It will be difficult to justify their continuing presence in South Korea after its adoption.”

The article stoked controversy in South Korea and forced the adviser to clarify his position by saying, “If a peace treaty is signed on the Korean Peninsula, North Korea denuclearizes, and North Korea and the U.S. establish diplomatic relations, there will naturally be a debate about whether or not U.S. troops should remain in South Korea.”

Moreover, since North Korea is currently allied to China, Kim may decide that retaining a certain level of U.S. forces on the peninsula may provide strategic leverage for Pyongyang in dealing with Beijing in the future.

There is historical precedent for Kim’s acceptance of U.S. troops on the peninsula.

In January 1992, Kim Il Sung, Kim’s grandfather and the founder of North Korea, reportedly wanted to improve relations with the United States after Kim Yong-sun, the Workers’ Party’s international affairs secretary met with U.S. State Secretary Arnold Kanter in Washington. The North’s officials reportedly said they would acknowledge the continued stationing of U.S. forces in South Korea even after unification.

Kim Jong-il, the current leader’s father, is said to have mentioned something to a similar effect to South Korean President Kim Dae-jung during the first inter-Korean summit in June 2000, regarding his belief that even following unification, “the Americans should stay on the Korean Peninsula.”