U.S., North and South at verbal loggerheads over denuclearization

U.S., North and South at verbal loggerheads over denuclearization 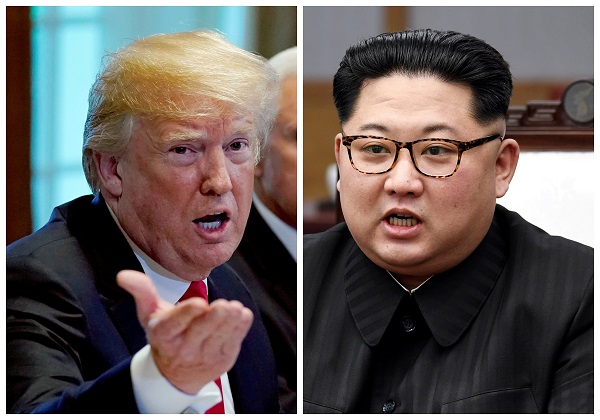 U.S. President Donald Trump said he is not looking to the Libya model for denuclearizing Pyongyang, stressing on Thursday at the White House that his deal with Kim Jong-un would make North Korea “very rich” and provide the young leader “very adequate protection.”

His comments contrasted with those of his national security adviser, John Bolton, who told CBS News’ “Face the Nation” last month that the White House was “looking at the Libya model of 2003, 2004” in pursuing North Korea’s denuclearization.

It remained unclear, however, whether both were referring to the same thing. Trump apparently was referring to Col. Muammar Gaddafi’s toppling in 2011 by rebel forces during the Arab Spring uprisings, whereas Bolton was talking about Libya’s denuclearization eight years earlier.

Trump’s latest comments came shortly after North Korea threatened to pull out of a planned summit with Washington on Wednesday, saying it had no choice but to “reconsider” the meeting if the United States keeps driving the regime into a corner by forcing it to unilaterally surrender its nuclear arsenal.

Kim Kye-kwan, the North’s first vice foreign minister, who relayed the comment in a statement published by state-run media, showed particular annoyance that the White House was comparing the regime with Libya, a country that was in a nascent stage of nuclear development when it agreed to abandon its program in return for sanctions relief in 2003.

Trump and North Korean leader Kim are supposed to meet on June 12 in Singapore, in what would be the first summit between the two countries.

“The Libyan model isn’t a model that we have at all when we’re thinking of North Korea,” said Trump. “In Libya, we decimated that country…There was no deal to keep Gaddafi.” With the North, said Trump, “This would be with Kim Jong-un — something where he’d be there. He’d be in his country. He’d be running his country. His country would be very rich. His people are tremendously industrious.”
In the terms of industry, it would be a “South Korean model,” Trump mentioned.

“If you look at South Korea,” he said, “this would be, really, a South Korean model in terms of their industry, in terms of what they do. They’re hardworking, incredible people.”

Trump stressed that Washington was willing to give “a lot” of security guarantees and “very strong” protections to Kim, continuing that the best thing the young leader could ever do is make a deal with him.

Trump said Kim would “absolutely” want to have a deal with him in order for that to work out, which he wasn’t so sure of after Kim met Chinese President Xi Jin-ping earlier this month for a second summit.

“There has been a big difference since they had the second meeting,” Trump said, without elaborating. Kim “absolutely wanted to do it. Perhaps he doesn’t want to do it [anymore]. Perhaps they spoke with China.”

Last Wednesday, the North denounced the Trump administration for insisting on complete, verifiable and irreversible denuclearization, referred to as CVID, as well as demands that it demolish its missiles and biological and chemical weapons. For the first time since it agreed to hold a summit with the Trump administration, the North threatened to walk away from the meeting.

Earlier on Wednesday, the North informed Seoul at 12:30 a.m. that it would “indefinitely suspend” a high-level meeting that was to take place at 10 a.m., blaming Seoul’s ongoing air force drills with Washington, which it described as an “undisguised challenge” to the inter-Korean declaration signed at the South-North summit on April 27 as well as a “bid to make a pre-emptive air strike” on the regime and “win the air.” The high-level talks were intended to discuss ways to implement agreements made in the Panmunjom Declaration that came from that summit.

The joint drill is scheduled to end on May 25. The two-week exercise has been held annually since 2009.
In response, South Korea’s Unification Ministry, which handles relations with the North, said in a statement issued through its spokesman Baik Tae-hyun that it was “regrettable” Pyongyang canceled the high-level meeting, adding the action was “inconsistent” with the fundamental spirit and purpose of the Panmunjom Declaration. Seoul urged Pyongyang to immediately return to the discussion table.
That backfired Thursday night.

North Korea’s state-run Korean Central News Agency (KCNA) cited Ri Son-gwon, chairman of the Committee for the Peaceful Reunification of the Country of the DPRK, a cabinet-level agency overlooking South-North relations, as saying South Korean authorities have “clearly proven to be an ignorant and incompetent group devoid of the elementary sense of the present situation” by expressing regret to the regime.

DPRK is the acronym for the North’s official name, the Democratic People’s Republic of Korea.
Ri went on, “Unless the serious situation which led to the suspension of the north-south high-level talks is settled, it will never be easy to sit face-to-face again with the present regime of south Korea,” according to an English version of the KCNA report.

The future of inter-Korean relations, he warned, “entirely” hinged on the behavior of the South Korean government.
On Friday, KCNA reported that Kim Jong-un presided over a meeting of the Central Military Commission under the Workers’ Party, where military officials “discussed and decided on a series of organizational measures to further strengthen” the army. The report made no mention of the country’s nuclear force or ballistic missiles.

Inter-Korean tensions rose again Friday afternoon, when the Unification Ministry said the North refused to accept a list of South Korean reporters it chose to attend next week’s demolition of the Punggye-ri nuclear test site.

Pyongyang informed Seoul on Tuesday that eight South Korean reporters — four from a news agency and four from a broadcaster — would be allowed to visit the North from March 23 to 25 to cover its dismantlement of a nuclear testing facility in the northeastern part of the country, alongside reporters from Russia, China, the United States and United Kingdom. Whether South Korean reporters would be totally excluded from the event was not known as of press time Friday.

The Blue House said Friday that President Moon was expected to talk about North Korea’s complete denuclearization and ways to ensure a “bright future” for the country if it gives up its nuclear arsenal with Trump during his visit to Washington next week. Moon, who will depart Seoul next Monday and return Thursday, is planning to hold a one-on-one conversation with Trump from Tuesday noon, Washington time, after which both leaders and their aides will discuss further over lunch.