Dijon’s Kwon may have to sit out World Cup

Dijon’s Kwon may have to sit out World Cup 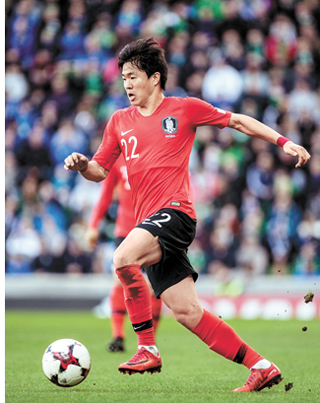 Kwon Chang-hoon of Dijon FCO dribbles the ball during a friendly match against Northern Ireland at Windsor Park in Belfast on March 28. [YONHAP]

Kwon started as a forward in Dijon’s French Ligue 1 match against Angers at Stade Gaston-Gerard in Dijon, France, on Saturday, but he was forced to leave the pitch at the 76th minute after injuring his Achilles tendon.

The 23-year-old is likely to miss the World Cup in Russia, where Korea will face Sweden, Mexico and Germany in Group F. Korea’s first match against Sweden is scheduled for June 18 in Nizhny Novgorod.

Although Kwon’s exact injury status has not been revealed, he appeared to have a ruptured Achilles tendon and will likely be sidelined for months, according to French media reports. Kwon is one of 28 people in Korea’s preliminary squad for the World Cup. He was considered a key attacker for Korea due to his impressive season in France. The former Suwon Samsung Bluewings player, who joined Dijon in January 2017, scored 11 goals in 34 matches this season. With Korea, Kwon has made four goals in 16 appearances.

Kwon’s injury adds more concerns for Team Korea’s head coach, Shin Tae-yong. He has already lost center back Kim Min-jae and midfielder Yeom Ki-hun because of injuries, and left back Kim Jin-su’s participation in upcoming matches is doubtful. Asan Mugunghwa midfielder Ju Se-jong and Gangwon FC forward Lee Keun-ho, who both made the provisional roster, were also hurt recently, but sources report that the two players will be able to compete at the World Cup.

Team Korea is scheduled to start training today at the National Football Center in Paju, Gyeonggi, after the players and coaching staff attend a team launching ceremony in Seoul. They will play against Honduras on May 28 and Bosnia and Herzegovina on June 1 in friendlies before confirming their final 23-man roster.